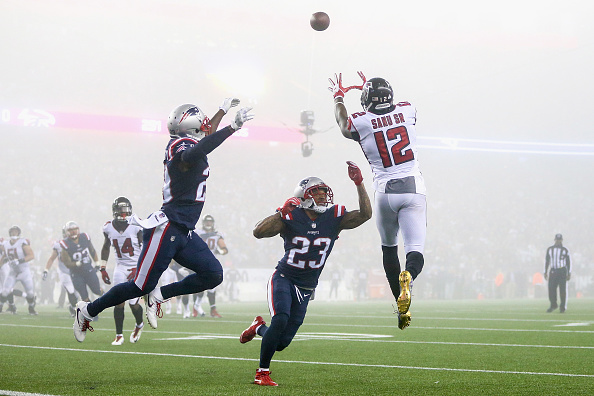 After the Thursday night game I was feeling really good after suggesting to wait on the Raiders and that they’d come around. Derek Carr didn’t appear to be suffering from any back injury against the Chiefs. Amari Cooper had a massive game so hopefully he can ride that wave of success the rest of the season. Crabtree even managed to bring in a touchdown as well. Now with the good comes the bad. Of course the week after I write up buying Carson Palmer he breaks his arm. And that’s insanely unfortunate. It’s completely different for a guy to get injured than if he had just been a bust the rest of the year. By all accounts, Palmer could still return by Weeks 15 and 16. But will he be worth hanging on to? Doubtful. Read on please!

If You’re Still Hanging on to David Johnson, Get Rid of Him

There were recently rumors/reports that Johnson could return by Thanksgiving after suffering an injury in the first game of the year. With Palmer now out, it would seem like a good time to get rid of Johnson if you’re still hanging on to him. You won’t get much for him, but without Palmer what damage can the Cardinals do on offense? This goes for almost anybody on Arizona: Fitz, AP, the Browns (John and Jaron), Nelson, etc. The offensive line is suspect and key players are banged up. They play San Francisco on the road next week after coming back from a brutal London game. The 49ers are searching for their first win of the season and it could easily come against this underwhelming group. If the Cardinals go on a skid that basically puts the playoffs out of reach, what incentive is there to play DJ or Palmer late in the year if they’re out of it? Why risk a young superstar RB in meaningless games? Currently Johnson is about 80% owned in both Yahoo! and ESPN fantasy leagues. If you can get a RB or WR with upside for DJ, you should give that trade serious consideration.

Do Not Trust Brett Hundley in the Immediate Future

The rest of the season will likely be a neverending nightmare for Green Bay. Hundley’s afternoon was salvaged by his production on the ground where he rushed for 44 yards and a touchdown. Yes, if a QB can give you numbers on the ground he holds fantasy value, but Hundley has been brutal when he’s had to throw the ball and he’s really hurt the fantasy values of Jordy Nelson, Davante Adams, and Randall Cobb. The running game should get by just fine and a Bye week gives Hundley more time to prepare and get comfortable with the first team at practice. The bad news is the Packers face the Lions, Ravens, and Steelers in three of their first four games after the Bye and those teams each currently rank in the top seven in terms of DVOA. The other team sandwiched in that schedule for Green Bay is the Bears who just held the Panthers to a field goal on Sunday. If you’re a desperate Hundley owner try and turn to Matt Moore with the Dolphins. If Jay Cutler’s injury is serious then Moore will get some starts and he’ll at least look more interested in playing QB than Cutler has looked so far this year.

If… And this is a BIG “if”… But if the Packers are still on contention for a playoff spot, we could see the return of Aaron Rodgers. Rodgers suffered a broken collarbone just a week ago, but he will be able to resume throwing activity in six weeks. He could return in Weeks 15 and 16 against the Panthers and Vikings. Currently Rodgers is about 60% owned on a variety of different sites so he’s somewhat available. If you can afford to stash him, then why the hell not? You have to be sitting pretty atop your league’s standings to make this move, but if there’s the slight chance you can get arguably the best QB in the league when healthy (and for the fantasy playoffs) you should at least stash him. If the Packers start losing and falling out of contention, or if you need that roster spot for another player then just drop him.

Evan Engram Should Be Started Everywhere

Well just not next week since the Giants are on a Bye. His ownership is pretty high so it’s too late to jump on the bandwagon and say that he should be picked up. But it’s kind of surprising that Engram was only started in 61% of ESPN leagues on Sunday. He’s had 19 targets his last two games and he’s recorded a touchdown in each contest. The injuries to Odell Beckham Jr. and Brandon Marshall have really presented plenty of opportunities for the rookie tight end. Right now he’s clearly Eli Manning’s favorite target in the offense. And though Eli’s passing numbers won’t wow anybody, Engram is a big fantasy commodity. Defenses may try tuning in to him a little more and scheming for him, but the volume he’s getting is amazing and it likely won’t end anytime soon pending injury.

Two weeks ago I wrote up that Roethlisberger was worthless. And for what it’s worth, he still is! Even in a game that the Steelers controlled easily Big Ben only threw the ball 24 times, completing just 14 passes. That’s not great for fantasy. But he did also throw two touchdowns. Now how does this benefit Martavis Bryant?

Well folks, I was one of those fantasy owners of Bryant who got burned by the pre-game rumors of the Steelers getting him more involved. They got him involved to the tune of one rushing attempt, one catch (on two targets) for FIVE total yards. That’s insulting. No wonder the guy wants to be traded. Now there are two reasons to buy low: 1. If he is traded (as unlikely as it is) hopefully it’s to an offense that will utilize him more. And 2. If he’s not traded and ultimately stays with the Steelers, you’re still buying very low on a guy with WR2 upside in an offense that is slowly finding its groove. The next three games for Pittsburgh feature opponents in the bottom half of the league in terms of opponent passing yards: the Lions, Colts, and Titans. In addition to those teams the Steelers also play the Patriots in Week 15 and they give up the most passing yards per game. If you acquire Bryant and he amounts to nothing then so be it. It’s a buy low suggestion; it shouldn’t kill you too much.

It’s time to hit the panic button on the Falcons. I stated Week 7 would be Julio’s big week. Technically I wasn’t wrong! He managed to finally find the end zone late in the fourth quarter of a game that was brutal to watch. Seriously, that fog sucked. Those darn Patriots are so desperate to cheat they drew inspiration from Geostorm and rolled that fog right in conveniently around game time. This game proves that Steve Sarkisian doesn’t know what he’s doing with the offense. Josh McCown threw for 300+ yards on this defense. Cam Newton had a “get right” game against them. Matt Ryan and the Falcons struggled big time.

A late touchdown in the fourth quarter was the first score for the Falcons that ended a scoreless streak of over 90 minutes. Sure Matt Bryant had a field goal blocked and he dinged one off the upright earlier in the game. But the offense looks slow. It looks inept. On a 4th & Goal on the half-yard line they run a jet sweep with Taylor Gabriel and don’t score. They signed Devonta Freeman to a $15 million signing bonus in the offseason and a big contract overall. But it’s cool, just avoid him in that spot. No biggie Sark!

Unfortunately you have to stick with Atlanta. They’re too good to be benched in your fantasy league. In a 2-QB/Superflex league you obviously stick with Matt Ryan. But in a standard league he’s not giving much value in return. The nice thing about Ryan is he tosses the pigskin against the Saints (twice) and the Bucs during the fantasy playoffs. But you’re sticking with Julio Jones and Devonta Freeman despite the frustrations on offense. These guys are too good to be benched and hopefully they can turn into the explosive team that we all know and love.

The Patriots Have Become a Streamable DST

It’s kind of crazy, but yeah they’ve played really well lately. In their last three games the Pats have given up just 38 points. It’s the “bend but don’t break” mentality. They’ll give up yards and let teams move the ball between the 20’s, but they won’t let you score. Should they be owned and started on a week-to-week basis? Not really. They draw the Chargers next week at home and Los Angeles has some talented players on offense that can do some damage. But this is a west coast team playing on the east coast and I’m a firm believer in the west coast team looking sluggish especially because this will basically be a 10:00am game for the Chargers. The O/U for this game will likely be pretty high, but the Patriots are in play as a streaming DST next week and a nice tournament play for DFS.

Feel free to give me a follow on Twitter (@RealDANlanta) and send verbal assaults my way for some of my hot takes that go awry. Thanks for reading! Stay strong the rest of the way!