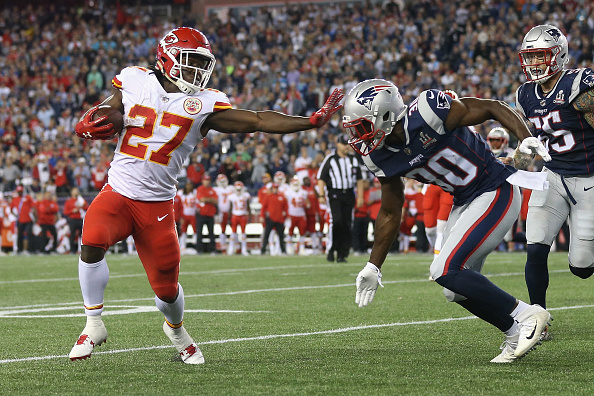 Week 1 of the football season is almost in the books as fantasy owners still await the fate of the two Monday night games. Per usual there were players that broke out and will be sought after heavily on the waiver wire. Often times the day after Week 1 usually signals over reactions. So here are some takeaways from this past weekend ranging from lukewarm to scorching!

And water is wet, right? Hunt looked every bit of the part of a stud RB in his debut Thursday night against New England. After fumbling on his first career carry Hunt really bounced back to post some video game numbers including 148 rushing yards, 98 receiving yards, and three touchdowns. Hunt is easily a top 10 RB the rest of the way as long as he avoids injury, but he probably even cracks the top five. This offense looked awesome in the season opener and it’s hard to imagine them going away from Hunt at this point. He should easily see 15-20 rushing attempts per game and five targets per game isn’t out of the realm of possibility. It’s just so easy to get excited about this kid’s fantasy prospects. 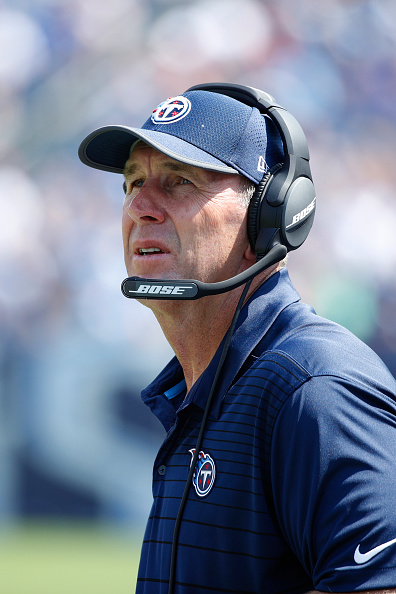 An onside kick to open the season? Are you serious? Talk about malarkey! Yes, the pun was intended. Mularkey stands by the decision to try and catch the Raiders off guard and it did not work out well at all. Four plays later the Raiders found the end zone. It wasn’t an overall impressive day for the Titans. Their lone touchdown came on a run from Marcus Mariota, but it was a fairly underwhelming day for the Titans. DeMarco Murray and Derrick Henry had just 18 rushes combined, but the offense had to settle for a couple field goals after getting inside the Oakland 10-yard line twice. It’s surprising the Titans weren’t more committed to the run even with one of the best offensive lines in the game. If there’s one positive to take away from this game it’s that despite all the mouths to feed Delanie Walker, Eric Decker, Corey Davis, and Rishard Matthews each had at least eight targets. It doesn’t get any easier for the Titans offense with the Jaguars, Seahawks, and Texans coming up.

The Falcons opened against the Bears as pretty nice favorites and came close to losing Sunday in the Windy City. Yes the standings read that they’re 1-0, but this was not the high-powered Falcons offense we were used to seeing from a year ago. They still put up 385 yards of total offense, but broken coverage and some seriously poor tackles by the Bears on both of Austin Hooper’s catches really helped the Falcons make up for a lackluster start. The Bears even had a golden opportunity to win the game on their last drive, but couldn’t punch it in from their own five-yard line.

A little rusty? Maybe. But this didn’t look like the same team that came close to winning the Super Bowl last year. Devonta Freeman typically doesn’t play well on grass. He benefits a lot more from artificial surfaces and even after his big contract in the offseason he only racked up 12 rushing attempts and two catches for 39 total yards. As a team the Falcons averaged just 2.8 yards per carry.

The passing game wasn’t much better. Reports emerged prior to the game of ATL wanting to feature Julio Jones more in the red zone after he only had nine targets inside the 20 in 2016. Screw the red zone, just get him more targets in general! Julio is arguably the best WR in the league and he saw just five total targets yesterday. Steve Sarkisian is clearly no Kyle Shanahan. As previously mentioned the passing numbers were salvaged by two catches from Austin Hooper (one for 88 yards, while the other went for 40). Matt Ryan was a big regression candidate heading into the season. He was the MVP of the league last year, but his 4,944 passing yards came on the 17th most pass attempts. That sort of efficiency is hardly sustainable and he only threw the ball 30 times on Sunday. Hopefully the Falcons don’t settle and get all fat and happy because this was not the same offense.

The Bengals Need to Fire Marvin Lewis, But They Won’t 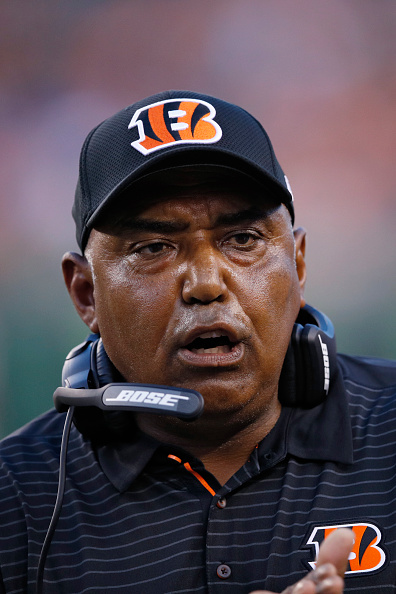 The Cincinnati Bengals sure do love settling for mediocrity. Actually, they love settling for crap apparently. Every year Marvin Lewis goes another season without a playoff victory. And every year he keeps his job. Is Marvin Lewis probably a good human being? Yeah, he seems like a swell guy. But he’s not a great coach. He’s been in Cincinnati since 2003 and he has zero playoffs victories. Yesterday’s showing against the Ravens was just atrocious. The offensive line sucks. The defense looked lost even with the Ravens offense looking boring at times. But Lewis is on good terms with Bengals owner Mike Brown. Coincidentally enough, once Brown took over as owner of the Bengals in 1991 the team hasn’t won a playoff game since. It seems Lewis and Brown are destined to ride this out together with no end in sight.

The Jaguars will finish as a top five def… Nay! The Jaguars will finish as THE top defense/special teams in fantasy football this year. In one of the biggest pricing discrepancies in DFS over the weekend, FanDuel had them as the fourth cheapest D/ST and they were the easy chalk. The Jags gave up just seven points to Houston and totaled ten sacks! Calais Campbell had four of them! The Jaguars are loaded with talent on defense and they play in a division with some inept offenses. The only thing that sucks about the Jags schedule is that this defense can’t go against the Jags offense. Such a shame. Offensively with the Jaguars there is little to look forward to outside of Leonard Fournette. Allen Robinson is done for the year after tearing his ACL. Bortles attempted 21 passes, but completed only 11 of them. Most of this was because the Jags had a very comfortable lead, but don’t expect much production through the air with this team. Marquise Lee is an intriguing waiver wire addition, but they clearly like pounding the run game here. 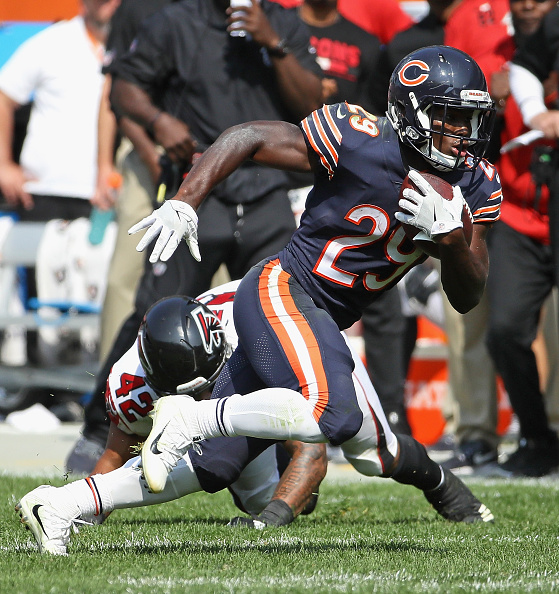 And it’s name is Tarik Cohen. Howard didn’t even have a bad day. He touched the ball 16 times total. In PPR formats he still posted 15 points. He did perfectly fine. But Cohen stole the show and put a big egg on every fantasy analyst’s face. Howard had eight more carries than Cohen (13-to-5), but the latter had 14 more rushing yards (66-to-52). Cohen also had eight catches for 42 yards and a touchdown. The rookie out of North Carolina A&T actually led the team in targets with 12. Howard still led in terms of snaps with 38, but Cohen was still on the field for 28. Going forward, after an impressive debut it’s difficult to imagine a scenario where the Bears go away from Cohen at this point. To be fair to Howard, he came close to catching a TD pass at the end of the game. But he appeared to brace for a hit from a Falcons defender and dropped the ball. Cohen is going to be a hot commodity on waivers this week. Howard owners should consider putting in claims for him.

The Patriots Have Nothing to Worry About

Remember last Friday when everyone woke up and freaked out about how bad New England looked and how Alex Smith torched them. Well as it turns out there were a lot of other bad teams this week too. Even teams that came away with wins looked iffy at times. The Steelers had their struggles against Cleveland. One can make the argument that the Browns really Schruted it (that’s an Office joke) and beat themselves per usual. Le’Veon Bell struggled to shake off the rust after missing all of the preseason, but the rest of the offense looked decent at times with Antonio Brown looking as awesome as ever.

Aside from Oakland and Pittsburgh did anyone else really look that great in the AFC? The Ravens beat the Bengals, but Flacco completed just nine passes on 17 attempts. The Ravens suffered another injury with Danny Woodhead leaving with a hamstring injury. Andy Dalton threw four picks after throwing 15 the last two years combined. The Jets and Bills played a game on Sunday to see who could suck less (although Shady did ball out). The Jags defense looked awesome, but the offense looked not awesome. Don’t even get me started on the Colts. There were even some NFC teams that didn’t necessarily impress over the weekend. Yes there were a few teams that looked fine, but a lot of teams looked like they were still in preseason mode. For all those claiming the Patriots were done just take a breath and calm down. It’s the first week of the season and they still have Belichick and Brady. They’ll still win the division and make the playoffs and there’s plenty of season left. In the words of Aaron Rodgers: R-E-L-A-X.

Ben McAdoo should wear a hat… like all the time. Whether it was the bowl cut he dawned last year or the slicked back look he sported last night, it just doesn’t work. McAdoo should try and make the fedora cool again.

Melvin Gordon Is NOT Good

In case you missed it during the preseason season, Melvin Gordon's Sophomore Campaign was put under a microscope. Basically after examining every rush attempt from 2016 it was found that he’s just not a very effective runner. But his ADP and value is dependent on his volume. In a full-point PPR league Gordon probably got you 18 points on Monday night. That’s very serviceable. Can’t take that away from him. But like the article attached above here’s a breakdown of his 18 rushing attempts:

13 of his rushing attempts went for two yards or less! And don’t bring up “Oh well they played the Broncos and they have a good defense,” when the Broncos gave up 4.3 yards per rush last year, which was 5th worst in the NFL in 2016! Outside of his first rushing attempt on Monday Night Football, Gordon averaged less than two yards per carry the rest of the night. The O-Line for the Chargers, once again, is not good. There were plenty of times when Gordon was handed the ball that you had to think “Oh he’ll easily make it to the outside” and he didn’t. Gordon’s success is based on his volume and that they go to him frequently in the passing game. But he’s not an efficient runner. Fantasy owners will spend the next 3-4 months cringing over his countless rushing attempts that go for two yards or less.

The Saints Should Be Feeling Buyer’s Remorse

In what quickly became an Internet meme, Adrian Peterson was spotted yelling at Sean Payton from the sideline toward the end of the first half and it didn’t get better after the game as reports came out that the two had to be separated in the locker room after a rough loss to the Vikings. It sounds like Peterson is suffering from Week 1 over reaction syndrome and if the Saints don’t move on from him he may find himself with a smaller workload going forward. And that isn’t much of a downgrade from his workload on Monday where he had just six carries and one target in the passing game. Quite frankly it’s still baffling why the Saints don’t just commit to Mark Ingram. He was as ineffective as Peterson in the run game, but Ingram at least had 54 receiving yards on five catches. Peterson certainly looked like a 32-year-old running back Monday night and this could be the sad ending for one of the greatest RB’s to play the game.