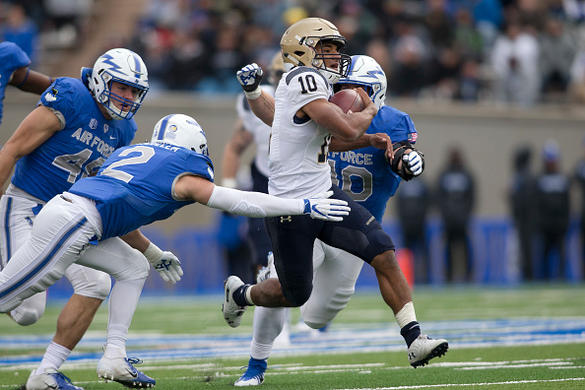 Who else watched Perry rack up a whopping 304 rushing yards and two touchdowns against rival Army a couple weeks ago? Although we can’t expect a repeat of that type of performance, it’s certainly a reminder of how massive Perry’s ceiling is as a runner in Navy’s triple-option offense. He’s now totaled 1,804 rushing yards and 21 rushing touchdowns in 12 games this season with at least 100 rushing yards in 10 of those outings. Plus, Perry has an upside in passing despite Navy rarely throwing the ball. He has 1,027 passing yards and six touchdowns through the air this year and has been able to take advantage against defenses that stack the box and go all-in on stopping the...

S. Bracho - RP
ARI
Diamondbacks manager Torey Lovullo announced Sunday that Silvino Bracho and Junior Guerra have tested positive for COVID-19.
It's unclear whether the cases were diagnosed through MLB's intake testing protocol or before. Either way, the two pitchers will be absent from summer camp workouts until they pass consecutive COVID-19 tests. Bracho suffered a recent setback in his recovery from Tommy John surgery, so it's unclear how much he is able to do at the moment anyway. Guerra signed a one-year, $2.55 million deal with Arizona in December.
Added Yesterday 9:11 pm (EST)
Added Yesterday 9:11 pm (EST)

F. Perez - SP
DET
Tigers RHP prospect Franklin Perez (shoulder) threw a bullpen session this weekend at Tigers summer camp.
Perez resumed working from a mound in February after taking several months off to a heal a shoulder issue, and it looks like he should be able to pitch in intraquad games at some point this summer. The 22-year-old was included in the Tigers' initial player pool, but it's unclear whether he'll see any actual MLB action.
Added Yesterday 8:53 pm (EST)
Added Yesterday 8:53 pm (EST)

F. Mejía - C
SD
AJ Cassavell of MLB.com writes that Francisco Mejia has "looked sharp" in the Padres' first two intrasquad games.
Mejia went 0-for-15 in the Cactus League this spring, but it's always been silly to draw any conclusions from spring training numbers. The 24-year-old former top prospect would seem to be a good option for the Padres at DH and should get a boost in fantasy value with the addition of that role to the National League scene. He's a sneaky post-hype breakout candidate heading into MLB's planned 60-game 2020 campaign.
Added Yesterday 8:28 pm (EST)
Added Yesterday 8:28 pm (EST)

K. Lewis - LF
SEA
Mariners manager Scott Servais praised Kyle Lewis' physical condition during a Zoom call with reporters on Sunday.
Lewis finally put his knee issues in the rearview last season and in September delivered an .885 OPS with five home runs over his first 18 major league games. He used the shutdown to work with private hitting, speed, and strength coaches. “Coming back from a very serious knee injury, it takes time,” Servais said. “You might be physically strong and everything checks out, but it’s always in the back of your head. That’s what it looks like to me, that it’s kind of freed him up now. ... The ceiling, the upside for Kyle, the sky is the limit."
Added Yesterday 8:10 pm (EST)
Added Yesterday 8:10 pm (EST)