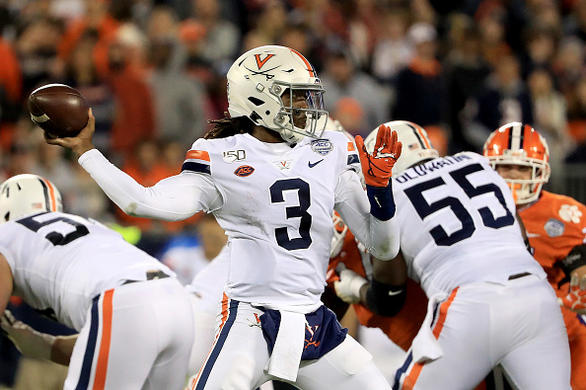 On a slate without a clear-cut top quarterback to pay up for, we should be targeting the highest over/under on the schedule and that’s the Music City Bowl matchup between Mississippi State and Louisville. And the best quarterback in that game is the Cardinals’ dual-threat Macale Cunningham. The sophomore began this season as the backup to Jawon Pass, but has been the starter since Week 3 after Pass got hurt. He’s been very solid with a balanced production of passing and running and he’ll be needed to make plays in both ways. The Mississippi State defense allowed 28 points and 376 total yards per game, including 227 passing yards given up per...

G. Polanco - RF
PIT
Gregory Polanco has not been present at the Pirates' workouts the last two days.
Manager Derek Shelton said Wednesday that Polanco's absence wasn't something he was going to talk about. Perhaps the team will be able to offer more on the outfielder's status Thursday.
Added 10:07 pm (EST)
Added 10:07 pm (EST)

M. Boyd - SP
DET
Matthew Boyd was not in the Tigers' summer camp Tuesday after coming in contact with someone who tested positive for COVID-19.
The good news is Boyd's test came back negative and he returned to the park Wednesday. It would appear that he should be fine.
Added 9:57 pm (EST)
Added 9:57 pm (EST)

W. LeBlanc - RP
BAL
Orioles purchased the contract of LHP Wade LeBlanc.
LeBlanc looks to be in line to open the season as part of the Orioles' patchwork rotation. The veteran left-hander posted a 5.71 ERA last season with the Mariners.
Added 9:53 pm (EST)
Added 9:53 pm (EST)

B. Belt - 1B
SF
Brandon Belt (heel) has been hitting and taking grounders but won't run the bases for another couple days.
Belt's heel issue it much better, but he's running out of time to get ready in time for Opening Day. It's going to be close. If he's not ready, we could see Pablo Sandoval at first base.
Added 9:49 pm (EST)
Added 9:49 pm (EST)

T. Cahill - RP
SF
Trevor Cahill (fingernail) is not expected to be ready in time for Opening Day.
Cahill has been sidelined with a fingernail issue and doesn't have time to get ramped back up. He had been in line for a bullpen job.
Added 9:46 pm (EST)
Added 9:46 pm (EST)

B. Anderson - SP
MIL
Brett Anderson's start in Wednesday's intrasquad game was cut short because of a blister.
The Brewers are saying Anderson's removal was precautionary. If the left-hander is indeed okay health-wise, he will break camp as part of the rotation.
Added 9:39 pm (EST)
Added 9:39 pm (EST)

K. Hiura - 2B
MIL
Keston Hiura was scratched from the Brewers' intrasquad lineup Wednesday as a precaution due to right arm fatigue.
The Brewers are expected to offer more on Hiura's status Thursday. It doesn't sound like this is anything to be overly concerned about at this point, though.
Added 9:36 pm (EST)
Added 9:36 pm (EST)