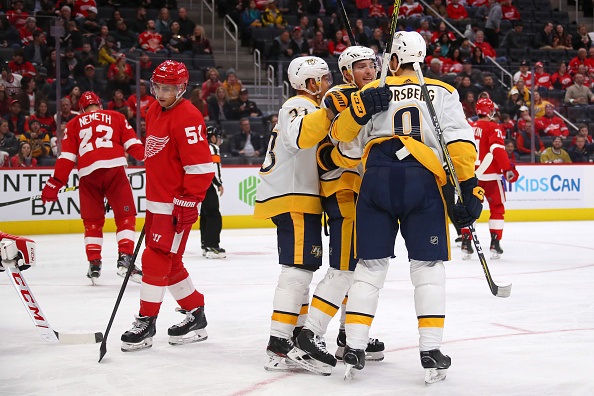 Our motto here at Fantasy Alarm is that we want to teach you how to play. We know you subscribe because of our expertise and experience and because of the time we devote to research that you may not have. But even though you may be leaning on us, we want you to know how we think so you can make better decisions. Below is an overview of NHL DFS along with some of the components that go into our decision making from contest selection to picking players to roster.

NHL DFS lineups traditionally consist of nine slots with eight skaters and one goalie. DraftKings lineups include two centers, three wingers, two defensemen, one goalie and one utility spot that can be filled by a skater from any position. FanDuel has essentially the same setup except they require a fourth winger instead of having a utility spot. Given the more restrictive lineup settings on FanDuel, it would be nice if they updated player positional eligibility more often like DraftKings does, but they don’t.

The next term we need to define is bankroll. Your bankroll is how much money you have available to put at risk. For simplicity’s sake, let’s say you put $100 into a site at the beginning of the season. The general rule as to how to manage your bankroll is the 80/20/10 rule. The 10 represents the idea that you put 10 percent of your bankroll at risk each time you play a slate. Of that 10 percent, 80 percent should be entered into cash games and 20 percent should be entered into GPPs.  Some people take an even more conservative approach to their cash/GPP split, like our own Rick Wolf who prefers to play 90% cash games. But if you follow the 80/20/10 rule, on a normal slate you’d play eight dollars in cash games and two dollars in GPPs with a $100 bankroll.

Investing heavily in cash games makes sense if you have a large bankroll, but if you’re playing with a limited wallet, it can feel like a waste of time to grind out $5-$10 cash games night after night. At the end of the season you’ll be up a few hundred bucks, which isn’t a lot of return for six months of work. An alternative is to use your cash lineups in small multipliers like triple up or quintuple up tournaments with a small number of entrants as well as throwing it in a small single-entry tournament in case it hits. On FanDuel, the “Beat the Score” contest type is akin to a cash game but offers a bit more upside on most nights. In those contests, every lineup that exceeds 125 points splits the portion of the non-rake pot equally. Sometimes you’ll end up with less than a 2x return, but generally your return is 2x or a bit higher.

If you’re new to DFS, take advantage of the beginner tournaments if the site you’re playing on offers them. This well help you play against people of a similar skill level as you learn the game. Other ways to avoid tougher competition are to play single- or limited-entry contests that cap the number of lineups any one person can enter into the contest.

It’s especially important that you play single- or limited-entry contests in cash games if possible. In cash games where players are allowed to enter a large number of separate entries, they will often enter the same lineup multiple times which can create a train effect. One second you can be 10 spots clear of the pay line and the next you can be out of the money after one lineup entered 20 times gets a goal and passes you.

One caveat to everything discussed above is how to handle short slates. Short slates can be defined as nights with less than five games. On those nights, it’s harder to succeed in cash games because there are fewer options for other players to miss on. When so many people are rostering the same players, the margin between cashing and not gets much smaller. On short slates, consider playing a smaller percentage of your bankroll and consider playing GPPs with an emphasis on being contrarian and rostering players who are not considered the chalk that evening.

If you’ve played other DFS sports, you know that stacking, aka rostering multiple players from the same team, is a common strategy. This strategy needs to be utilized in hockey as well.

The first step in stacking is knowing which players are going to be on the ice together. Teams hold a morning skate before most games in which they take line rushes that indicate to us what the lines will be that evening. We also have sites like naturalstattrick.com with game charts that show us how much time each player spent on the ice with other players on his team both at even strength and on the power play. When writing the Playbook, we’ll look back at logs from recent games to identify trends about what players have been playing together recently.

Mini-stacks, usually meaning two players, are the best stacks for cash games so that you don’t get over-exposed and thus over-reliant on one team for a slate. You can extend a mini-stack to three players from the same team in cash games if the slate is a bit shorter or if you really love the matchup. You can often save money in mini-stacks by using cheaper line mates of a stud player, which gives you exposure to the stud without having to pay the cost.

Hockey has had somewhat of an advanced-metric movement in recent years, though not nearly to the Moneyball extent we’ve seen in baseball. Most “advanced” metrics in hockey are shot-based metrics. How many times a team or player shoots the puck towards the net, whether it hits the back of the net, the goalie, the crossbar, the glass behind the goal or a defender’s shin on its way to the net, is the key to fancy stats.

The main fancy stats are Corsi and Fenwick. Corsi is the number of times a player or team shoots the puck, no matter the result of the shot. In other words, Corsi defines all shot attempts. Fenwick is all shot attempts that are not blocked by a defender, aka unblocked shot attempts. We’ll most often refer to Corsi in the Playbook, but we’ll also refer to these stats generally as “possession” numbers as the number of shot attempts is a good indication of which team or player is possessing the puck most often.  Just know that when we say a player or team or line has good “possession numbers” we mean that they have good underlying stats that indicate future success other than just their point totals.

They say you miss 100% of the shots you don’t take, but you must possess the puck to shoot it. That’s basically the TL;DR of advanced hockey stats.

Teams have a tendency to match up lines in a consistent manner, so looking at recent game logs can give you an idea of which individual players will have good or bad matchups. As an example, a team might have a “second” line that dominates in the aforementioned possession game, meaning they tend to attempt more shots than their opponents when they’re on the ice, and the coach might have a tendency to use that line against the opposing top line in home games. In that instance, the second line of the visiting team would be in line for the better matchup.

There are about a million different variations of how line matchups work, and they’re constantly in flux, but that’s what you have us for. We’ll be here all season to keep up with the trends and point out the good and bad matchups each and every day.