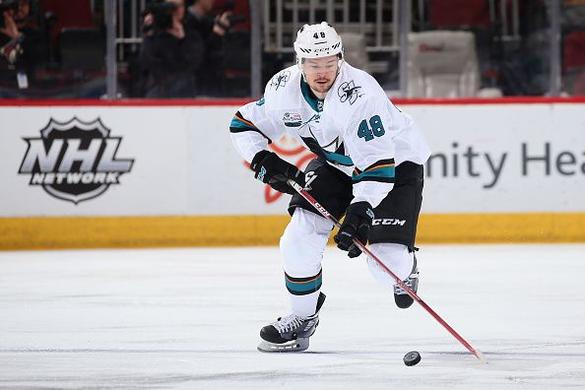 Below are game breakdowns for Sunday’s three-game DFS NHL slate followed by example lineups. Please note that the pivots in the lineups are intended to skew more toward GPP plays.

This is the least appealing game of the slate from a fantasy perspective. It’s the game with a line closest to even odds of the three with the Jets being a -125 favorite, and both teams have slightly below average matchups per my matchup stat.

If you’re picking Jets, you want to pick the line that will avoid the matchup with Sidney Crosby’s line. The Penguins have been hit hard by injuries, so they lack depth after the Crosby line. Last year the Jets tended to let their second line handle opposing top lines in home games, and you could make the case they followed the same pattern in their first home game this season. Andrew Copp and the second line took on Eric Staal’s line in their only home game so far this season, though you could make the case that Mikko Koivu’s line is...

NHL David Pastrnak not on the ice again Tuesday

NHL Corey Crawford not available for start of camp

NHL Flyers focusing on next season for Patrick

NHL Bryan Little won't be an option for Return to Play

T. Frederic - F
BOS
Trent Frederic is skating on his own after practice.
Frederic is one of three Bruins who have yet to practice with the team, David Pastrnak and Ondrej Kase being the others. It appears that Frederic could be injured but per NHL rules, nothing is allowed to be disclosed to protect players suffering from the coronavirus.
Added 11:39 am (EST)
Added 11:39 am (EST)

P. Dubois - F
CBJ
Pierre-Luc Dubois is not participating at practice Tuesday.
Dubois was on the ice before practice but left the ice once practice began. GM Jarmo Kekalainen would not comment as per NHL guidelines. Dubois had 18 goals and 49 points in 70 games when the NHL paused on March 12.
Added 11:21 am (EST)
Added 11:21 am (EST)

K. Bellows - F
NYI
Kieffer Bellows was on the ice Tuesday with the second group.
Bellows did not practice on Monday as he was deemed to be 'unfit to play' by the Islanders. Today he is obviously fit enough. Bellows had a couple of goals and an assist in eight games for New York this season after scoring 16 times and adding eight assists for their AHL affiliate in Bridgeport in 45 games.
Added 11:17 am (EST)
Added 11:17 am (EST)

D. Dube - F
CGY
Dillon Dube and Buddy Robinson were not at practice Monday.
Per league rules, the Calgary Flames were not allowed to divulge the reason the pair were unable to skate. Dube had six goals and 10 assists in 45 games this season, seeing third line minutes for most of the season.
Added 10:42 am (EST)
Added 10:42 am (EST)

L. Draisaitl - RW
EDM
Leon Draisaitl, Nathan MacKinnon and Artemi Panarin have been named the finalists for the Ted Lindsay Award.
The Ted Lindsay Award is voted upon by NHL players as to who is the most valuable player in the league. Draisaitl ended the season with 43 goals and 110 points while MacKinnon had 35 goals and 93 points. Panarin had 32 goals and 95 points and was second in the NHL with a plus-36 rating.
Added 10:34 am (EST)
Added 10:34 am (EST)

M. Necas - F
CAR
Martin Necas is on the ice Tuesday.
Necas missed practice Monday and whenever someone misses practice, you think the worst at this time, so it's good news that Necas is skating. He had 16 goals and 36 points in 64 games this season and is a valuable member of the Hurricanes team at this time.
Added 10:29 am (EST)
Added 10:29 am (EST)

V. Nichushkin - F
COL
Valeri Nichushkin saw second line action Monday, alongside Nazeem Kadri and Andre Burakovsky.
It has been quite the comeback season for Nichushkin who was without a team last off-season after the Dallas Stars bought him out. The Avalanche inked him to a one-year deal last August and have reaped the rewards ever since as he has been a stud on the penalty kill as well as even-strength situations. He had 13 goals and 27 points with a plus-26 rating in 65 games.this season. Playing on the second unit with Kadri and Burakovsky only adds to his value.
Added 9:54 am (EST)
Added 9:54 am (EST)