Fantasy Baseball Daily Round Up: August 6 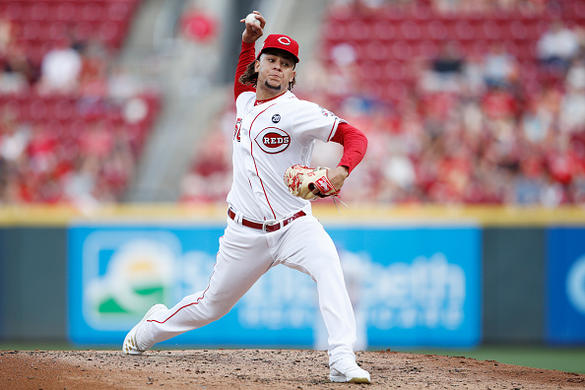 One of the more interesting developments from the Trade Deadline was that the Mets decided to be buyers, or at least that they did not decide to be sellers. They picked up one of the more prominent starters available in Marcus Stroman and held on to Zack Wheeler and Noah Syndergaard who were the subject of many trade rumors. Since the deadline, they have won five of six games after a doubleheader sweep of the Marlins yesterday. Combined with the six-straight wins they had before the deadline, the Mets are now above .500 and only 2.5 games back of a Wild Card spot. They also have a positive run differential now, which is something other teams in the Wild Card race like Philadelphia and Milwaukee do not have.

This is easy. Luis Castillo led all starters yesterday with 13 strikeouts and 25 swinging strikes. This is the second day in a row that a Cincinnati starter has impressed against an Angels team that has a sub-20-percent strikeout rate against right-handed pitching this season. However, Angels on the active roster have a 21.5 percent strikeout rate, so they’re not as bad of a match-up for righties at the moment.

Castillo has a career-best 29.5-percent strikeout rate that is backed up by a career-best 16.4-percent swinging strike rate, which ranks second in the league among qualified starters behind only Max Scherzer . His one issue has been walks as his walk rate is in double-digits for the season. However, he seems to be solving that problem as his walk rate is only 6.2-percent in his last seven starts. According to Fangraphs’ pitch values, Castillo’s changeup is his most valuable pitch, and apparently, it was really working last night.

Four players homered twice on Monday, and three of them are well-known guys, owned in basically all fantasy leagues: Christian Yelich , Javier Báez , and Marcus Semien . Three guys had double-digit total bases, two of whom were Yelich and Jonathan Villar , and Villar is another guy with a high ownership percentage. The fourth double dong and third double-digit total base guy however, has a single-digit ownership percentage in ESPN leagues. That guy is Yankee outfielder Mike Tauchman who went 3-for-4 with two home runs, three runs and three RBI. Tauchman was a 10th round pick of the Rockies in 2013 who had all of 69 plate appearances prior to this season (nice). He’s a 28-year-old rookie, but he’s hitting like one of the best players in the league right now.

Normally the game of the day features a massive comeback or some other late-inning drama. But Monday’s best game saw only one run scored, and it came in the fourth inning. Starters Aaron Civale and Mike Minor combined for 13 innings of one-run ball with each striking out seven and walking only one. The bullpens allowed only four baserunners in a combined five innings of work. The Indians got a runner to third base twice but could never capitalize. The Rangers got a runner to third base only once when Elvis Andrus tripled to lead off the fourth inning. A Nomar Mazara sacrifice fly one batter later turned out to be the difference in the game. Here’s the game graph courtesy of Fangraphs. 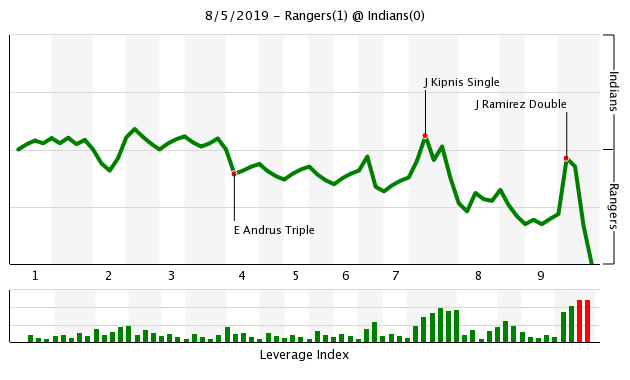 The Mets will look to keep rolling today with Zack Wheeler getting the start. Wheeler returned from injury just before the deadline and has been great in two starts since. He earned the win and struck out seven with no walks in both starts. The big buyers at the deadline were the Astros, and their big acquisition, Zack Greinke , will make his first start with his new team. The Astros will face the Rockies, but the game is in Houston rather than at Coors. Greinke has made eight starts in Houston in his career and has a healthy 3.05 ERA in his new home park.