Fantasy Baseball Daily Round Up: August 5 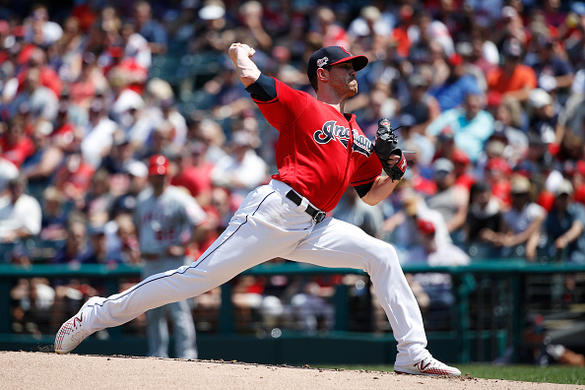 The Cubs completed a three-game weekend sweep of the Brewers, led by another strong performance from Yu Darvish who now has a sub-4.00 xFIP. With the Cardinals losing, the Cubs are a game-and-a-half clear for the division lead, and they lead the Brewers by four after the sweep. With just under two months to go in the regular season, that is the only division where the lead is less than three games and one of only two where the lead is less than seven games. The wild card races will encompass a lot of teams, but division titles are far more valuable since the addition of the second wild card.

Only four starters recorded more than 18 outs on a full slate yesterday, and only one of them recorded more than 21. That would be Shane Bieber who recorded all 27, needing only 107 pitches to go the distance. Bieber allowed two runs and only five baserunners, all of which reached on hits and none on walks. He had eight strikeouts and a day-leading 14 swinging strikes generated, which is impressive against an Angels team who ranks top 10 in wRC+ vs. RHP with a sub-20-percent walk rate. Bieber now has a 3.31 ERA on the season and an xFIP that is even lower at 3.17.

There may well be more deserving candidates of this fake award, but let’s give it to A.J. Pollock so we can talk about him. Pollock had a perfectly good day going 2-for-3 with a home run and a double while scoring twice and driving in two. Since his return to the lineup on July 12, Pollock has a healthy 138 wRC+ in 71 PA. It has not been a BABIP-driven fluke stretch, and he’s hitting for power with a .266 ISO since his return not counting Sunday’s game. He is owned in any season-long league with any depth, but he is a shade under 75 percent owned in ESPN standard leagues, so give a look for him on the wire in shallow leagues.

Pollock’s double got the Dodgers to within two runs of the Padres in the bottom of the eighth inning. The Dodgers had only a 7.1 percent chance of winning the game entering that bottom half, but Pollock’s double and fielder’s choice plated two and cut the lead to one. Max Muncy later ended it in walk-off fashion with a one-out double. Chris Paddack and Kenta Maeda started the game in what could have been a pitcher’s battle. But Maeda was pulled in the third inning and Paddack only recorded 12 outs. The offenses combined for 23 hits and five home runs. Here’s the game graph courtesy of Fangraphs. 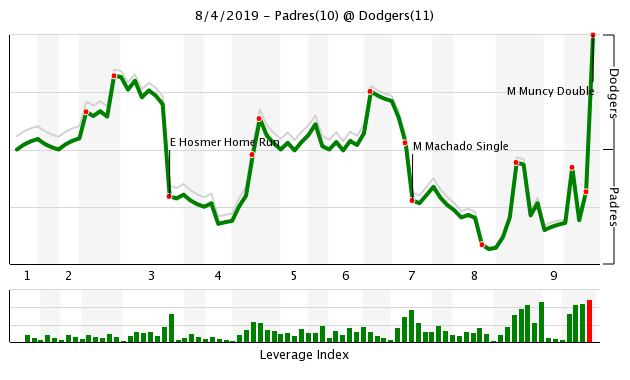 Circling back to that tight NL Central race, the Brewers have a chance to gain back some of that ground they just lost as they open a series with the 48-63 Pirates. The Cardinals will have a hard time keeping pace as they travel to LA for a series with the Dodgers. The Cubs also have a tough matchup against the A’s, who would be leading the NL Central, if they played in that division. The best pitching matchup of the day is between double-digit-game winners in Mike Soroka and Jake Odorizzi . Both the Braves and Twins lead their divisions, though Minnesota’s lead is narrower at only three games over Cleveland.