Fantasy Baseball Daily Round Up: July 4 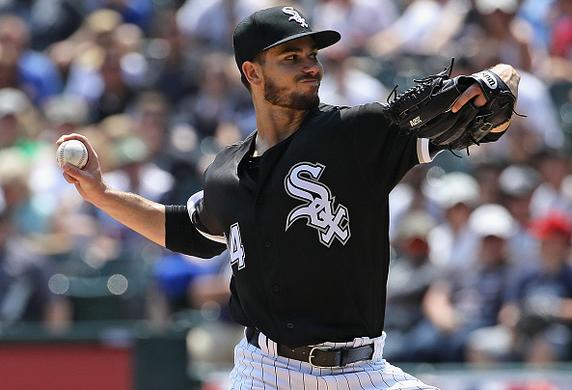 Dylan Cease made his major league debut for the White Sox yesterday, earning a win while allowing three runs and striking out six in five innings. Cease was drafted by the Cubs but moved to the South Side in the trade that sent José Quintana to the Cubbies. Cease was a sixth-round pick but only because he was injured. The Cubs signed him for $1.5 million, which was the same slot value as the 38th pick. He flashed his upside in the minors with high strikeout rates (along with high walk rates), and his 38.6 percent strikeout rate in 10 Double-A starts was eye catching. He struck out more than a batter per inning yesterday but also walked four. Getting the walks under control will be the most important thing for the rookie going forward. 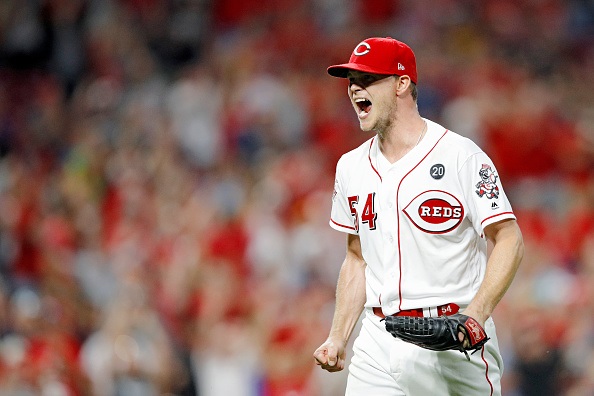 Stephen Strasburg is the right answer here as he struck out 14 and allowed only four baserunners and no runs over 7.1 innings yesterday. That said, Strasburg is owned in all leagues, so he’s less interesting to discuss. Plus, his excellent performance came against the Marlins. You could argue he should’ve dominated.

The more fun name to talk about is Sonny Gray (25.3 percent owned in ESPN leagues) who was arguably as good as Strasburg yesterday, if not better given the matchup. Gray allowed no runs and only five baserunners yesterday while striking out 12 over eight innings. Gray did that against the Brewers who rank 13th in wRC+ against right-handed pitchers, while the Marlins rank 29th. Gray now has a 3.59 ERA in 17 starts and an xFIP of 3.46 to back it up. His strikeout rate is easily the best of his career at 27.8 percent. He has dropped the cutter that was a problem pitch for him last season in exchange for more four-seamers, which has been a plus pitch this season per Fangraphs pitch values. Gray has been legitimately good and should be owned in more leagues.

Hunter Renfroe went 3-for-4 with a home run and a double while scoring twice and driving in two yesterday. The home run was his 25th of the season, and he now ranks third in the league in ISO. THIRD! The only guys ahead of him in ISO are Christian Yelich and Cody Bellinger . He’s only 70.5 percent owned in ESPN leagues, and while those are shallow leagues, it’s insane he’s not owned in all leagues of that type. Renfroe had his best month of the season in June with a .388 wOBA, and he did it despite a .200 BABIP thanks to nine home runs and a 12.6 percent walk rate. Here’s his homer from yesterday, an impressive oppo shot:

It's his 25th home run of the season, tying Franmil Reyes for the team lead!#FriarFaithful | @Padres | @Hunter_Renfroepic.twitter.com/FAtjENiUqH

A Carson Kelly home run in the top of the ninth gave the Diamondbacks a 4-3 lead over the Dodgers, but the Dodgers scored in the bottom half and took the game to extras. In the bottom of the 10th, the aforementioned ISO stud Bellinger hit a walk off solo home run, his 29th of the season. The craziest thing about the walk off is that it’s the fifth consecutive game the Dodgers have won in walk off fashion. That hasn’t been done since the A’s did it in 2004. Here’s the game graph courtesy of Fangraphs. 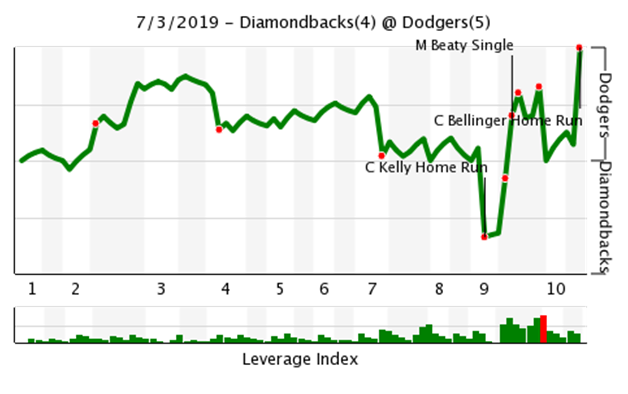 We’ve got 12 games on tap for this Independence Day, and the schedule makers have split up the start times. We’ve got four early afternoon games (one game actually starts in the AM), four late afternoon games that start before the typical 7:00 ET start time, and then four more games starting at the normal start time or later. The best starter of the early games is Brandon Woodruff who has a sub-3.00 xFIP in his last five starts. Yonny Chirinos isn’t on the level of Woodruff or the best starters of the evening slate, but he’s the best of the bunch in the late afternoon with a sub-3.00 ERA in the last month. And then in the main slate you have Lance Lynn and Hyun-Jin Ryu who lead all of the day’s probable starters in WAR for the season.