Fantasy Baseball Daily Round Up: June 24 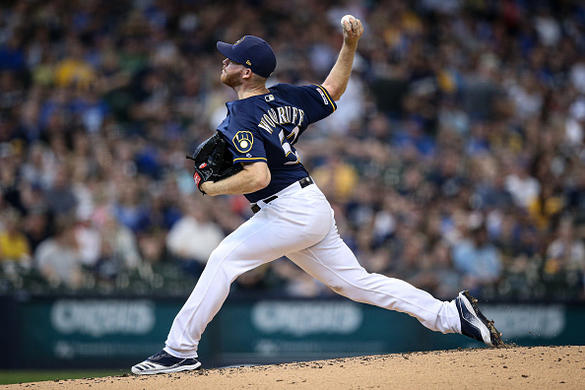 The Yankees have now homered in 26 straight games, which is a franchise record. They’re now one short of the major league record held by the Rangers. They’ll face right-hander Aaron Sanchez who has a 5.49 ERA and 1.37 HR/9, so they have a pretty good chance of tying the record. It also helps that Sanchez is right-handed. The Yanks are tied for second in wRC+ vs. RHP, but they’re 23rd in wRC+ vs. LHP. Presumably their performance against lefties was hurt by extended absences of Aaron Judge and Giancarlo Stanton and will improve with both back in the lineup.

In yesterday’s MLB DFS Playbook (10-game main slate only), I noted that Brandon Woodruff trailed only Justin Verlander and Jacob deGrom in K-BB% and SIERA in the last 30 days. But it was also noted that Woodruff easily had the best matchup of the three against the Reds and was thus the better play at a cheaper price tag. Verlander and deGrom were good as they each struck out nine and allowed three and two runs, respectively. But Woodruff led all starters on the day with 12 strikeouts allowing eight baserunners and three runs over seven innings.

Woodruff’s ERA is hovering just one point above four, but a SIERA of 3.51 means more positive regression should be coming. But even more encouraging is his 23.1 percent K-BB% which ranks ninth among qualified starters. Woodruff is owned in 86.5 percent in ESPN.com leagues, so he’s owned in all deeper formats, but if you’re in a shallow format, he needs to be added if he’s somehow still available.

DJ LeMahieu could easily be the guy here as he led the league in total bases yesterday thanks to his franchise-record-tying home run to go along with a triple. But instead we’re going to go with Luis Arraez simply because you may not have heard of him, and he’s fascinating. Arraez is a 22-year-old middle infielder for the Twins who made his major league debut on May 18. He has appeared in 14 games and totaled 44 PA since his call-up. Here’s the crazy part about Arraez: he has eight walks and two strikeouts. Basically no one has that kind of plate discipline, and literally no one has it when they first reach the majors. Arraez made contact in all four plate appearances yesterday and got four hits.

The Padres had a 97.9 percent chance of winning in the top of the ninth inning yesterday with a three-run lead and a runner on second with no one out. But that runner on second never made it around to score, and the lead remained three. In the bottom half, the leadoff man reached on an error and was standing on third a batter later after an Adam Frazier double. Kevin Newman and Bryan Reynolds followed with RBI singles, and at that point the Pirates had erased to 2.1 percent chance to win and had a win expectancy of 50.5 percent. A sacrifice bunt and a groundout later, the game was tied at seven, but the Pirates couldn’t end it in the ninth.

Here’s where things get really weird. The Padres scored three runs in the top of the tenth to get their win expectancy back up over 97 percent. But a walk, two singles and a double later, the Pirates has scored three in the bottom half of the 10th to tie the game and erase yet another sub-three percent win expectancy. This time though the Pirates were able to end it as Kevin Newman drew a bases loaded, two-out walk to end a truly absurd game. Here’s the game graph courtesy of Fangraphs. 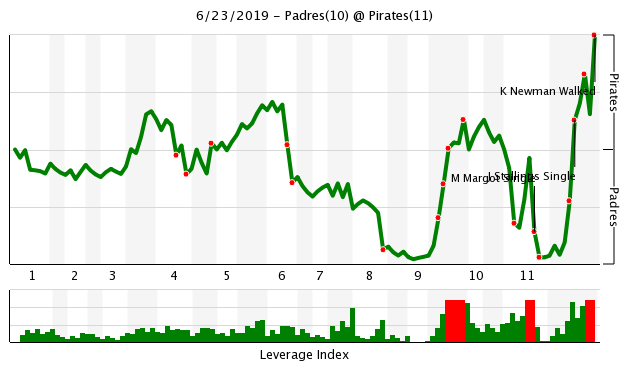