Fantasy Baseball Daily Round Up: June 11 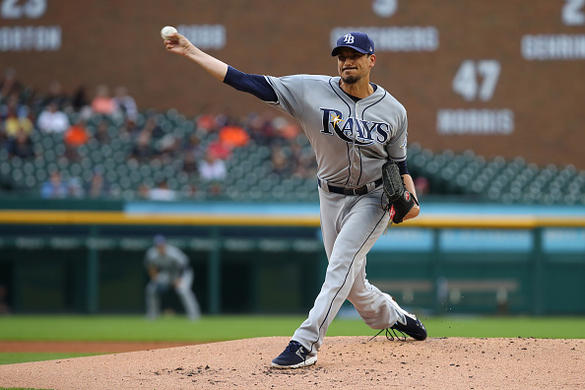 The Phillies and Diamondbacks combined for a whopping 13 home runs last night, setting a major league record. Every one of these balls left the yard.

There are a couple of interesting tidbits from the linked piece above. The first is that it was almost 14 total home runs as a Nick Williams home run in the eighth was overturned and called a double instead. The second involves the previous record of 12. That record belonged to the Tigers and White Sox, who combined for 12 home runs…twice! In 1995 those teams set the record and then tied their own record in 2012. Baseball is weird.

We’re going to give the nod to Charlie Morton here even though Chris Sale probably deserves it, but we’ll get back to Sale in a minute. Both Morton and Sale went seven innings yesterday, they both allowed only four baserunners, and they both didn’t allow an earned run. Sale struck out 10 to Morton’s seven, but Morton had generated one more swinging strike with 14. Morton’s swinging strike rate is a career-high 13.1-percent, which ranks top 20 in the league among qualified starters. His curveball has been his best pitch this season according to Fangraphs’ pitch values, and you can see why on this nasty curve he got a swinging strike on last night.

The hitting performance of the day has to come from that crazy 13-home run game. Three hitters hit multiple home runs, though it wasn’t the only game of the day with two double dongs in a game as the Atlanta-Pittsburgh game had one guy from each team go yard twice. Eduardo Escobar was the most impressive hitter in the ARI-PHI game going 4-for-5 with two home runs, a double, three runs and five RBI.

Escobar now has 17 home runs on the season and an impressive .295 ISO that ranks 13th in the league among qualified hitters. His average exit velocity is up somewhat, but he ranks outside the top 150 in barrels per plate appearance, so his 18.7-percent HR/FB rate is coming down at some point. Today might be a good day to make a few trade offers if you own Escobar to try and obtain someone with more sustainable power.

As promised, we’re now back to Sale as he and Mike Minor had quite the duel in what was a tight, back-and-forth affair. Sale and Minor combined for 15 innings allowing only three runs (two earned by Minor) with 16 strikeouts compared to three walks. Sale was done after seven while Minor went eight, and things got interesting once the starters left the game.

The Sox entered the ninth with a 2-1 lead and had more than a 90 percent chance of winning once Texas’ lead off man was retired. But three consecutive hits later the Rangers had taken a 3-2 lead and Boston’s win expectancy was only 17.5-percent. Matt Barnes was the bullpen arm responsible for blowing the lead. Boston was down to their last out in the ninth but got a game-tying single from Brock Holt to force extras.

In the bottom of the 10th, after Texas failed to score, Boston’s win expectancy was all the way back up over 70-percent as they had runners on first and second with only one out. However, they failed to score, and Texas took the lead for good in the 11th with hits by Danny Santana and Elvis Andrus .

Though it’s only June, this was a relatively important game from a standings perspective. Boston entered the game one game back of the Texas for the second wild card spot, and they will have to win all three remaining games in the series to be ahead of the Rangers in the standings when the series is over. That said, the Rangers have been quite the surprise team, and some regression should be expected for them in the second half of the season. 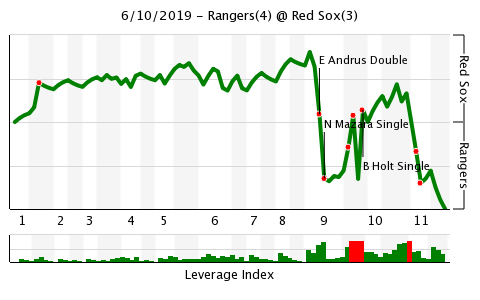 After a postponement yesterday, a Subway Series will begin between the Yankees and Mets today. If, at the beginning of the season, you had been told that in a game featuring James Paxton and Jason Vargas it would be Vargas that was the more interesting pitcher, you would’ve thought I was crazy. But that’s the case as Vargas has been on a strong run of seven starts in which he has a 1.85 ERA. There has certainly been some luck involved as a .240 BABIP and 90 percent strand rate are not sustainable. But the Yankees might not be the best team to impose some regression on him as they rank 24th in the league in wRC+ against left-handed pitching. With their stud right-handed bats on the IL, the Yanks simply haven’t been dangerous for lefties, so Vargas will look to keep the run going tonight.