Fantasy Baseball Daily Round Up: April 19 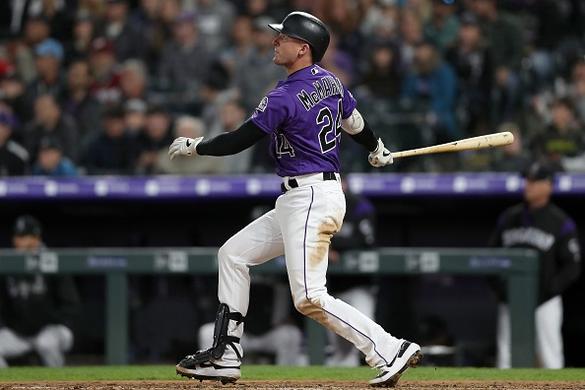 The guy who destroyed this ball is hitting .347 in 127 Triple-A at-bats with 18 walks compared to 10 strikeouts. It’s criminal that he is not in the major leagues.

INTO THE PARKING LOT!!!

Both Julio Urías and Luke Weaver are worth considering for this slot given that they each struck out nine batters and didn’t allow any runs. However, the youngsters only went five and six innings, respectively. Patrick Corbin also struck out nine but went 7.2 innings while allowing only one run. Through four starts Corbin has a 2.36 ERA with a 2.93 SIERA to back it up. He’s striking out 32.4 percent of batters faced with a 4.9 percent walk rate, which gives him the sixth best K-BB% in the league so far. If you throw out his mediocre first start, Corbin now has 29 strikeouts and only three walks in his last three starts. Here are his nine K’s from yesterday, six of which were called third strikes.

Ryan McMahon deserves this recognition for his two-home run, three hit game last night, which had him leading the league in total bases yesterday with nine. This was McMahon’s first game since April 5 as he returned from the injured list after an elbow injury. With Daniel Murphy also injured, McMahon is in line to see regular playing time for the time being. McMahon has a 123 wRC+ through 33 PA that includes a healthy 12.1 percent walk rate. He’s owned in less than 10 percent of ESPN leagues and is worth considering as a pick-up.

At one point in the top of the seventh inning yesterday, the Mariners had a win expectancy of 99.8 percent as they led the Angels 10-2. Despite that, the Mariners had less than a one-third chance of winning the game in the bottom of the eighth with the game then tied and the Angels having a runner on first base with no one out. The Angels had a monster bottom of the seventh in which they scored seven runs with seven hits and one walk. They trailed by one going to the eighth and completed the comeback when David Fletcher led off the eighth with a home run that was followed by a Kole Calhoun walk that got them to their peak win expectancy.

That’s right, LA’s win expectancy never got higher than 66.8 percent as the Mariners managed to salvage the game and avoid a colossal collapse. Anthony Swarzak worked out of a two-baserunner jam in the eighth, and the M’s manufactured a run in the ninth with a one-out single, a stolen base, and a game-winning single by Jay Bruce . Here’s a look at the game chart courtesy of Fangraphs. 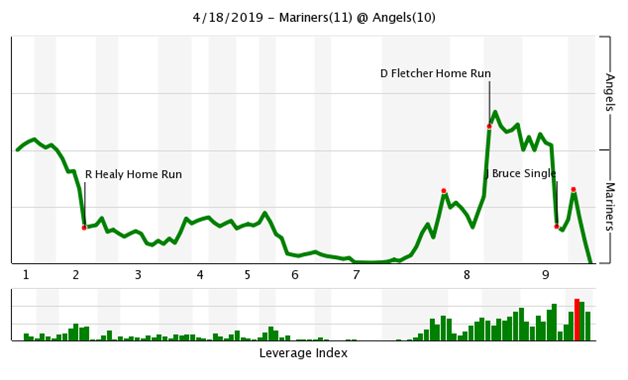 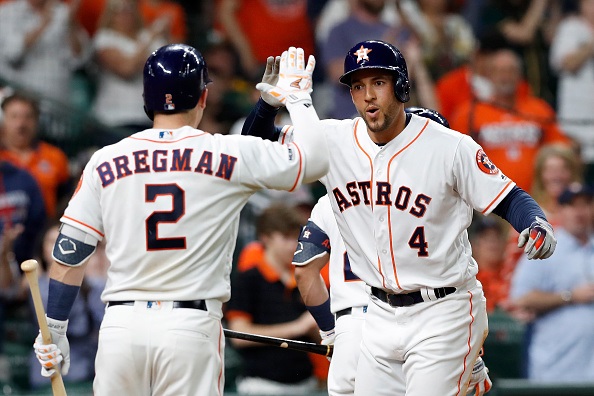 There’s a game in Coors tonight with the Phillies visiting the Rockies, so that game of course has the highest over/under of the slate at 10.5 runs. German Márquez will face Vince Velasquez with the Rox being a -130 favorite. Despite the high over/under in that one, Colorado does not have the highest projected run total of the day. That distinction belongs to the Astros who are on the road in hitter-friendly Texas as -230 favorites with Justin Verlander facing left-handerDrew Smyly . Using players on their active roster, the Astros have a combined 123 wRC+ vs. LHP dating back to last season, which leads the league.

The team with the lowest projected run total of the day is Arizona in Cleveland against Corey Kluber . It’s interesting that Vegas is giving Kluber so much credit given how poorly he’s started the season. Kluber has a 6.16 ERA through four starts with a 5.18 xFIP that indicates he’s not just been unlucky. His strikeout-to-walk ratio is barely over 2:1, and his soft contact rate is a paltry 13.1 percent. Concerned owners of Kluber are hoping Vegas’ belief that Kluber turns it around come to fruition. 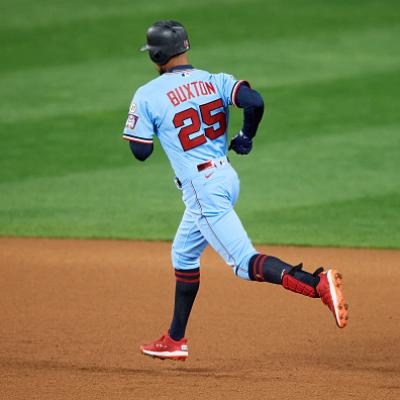 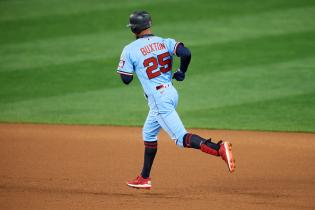 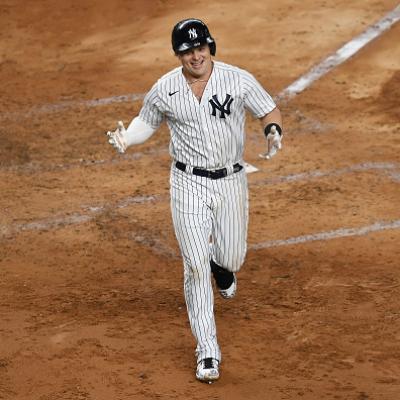 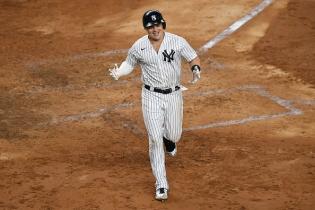 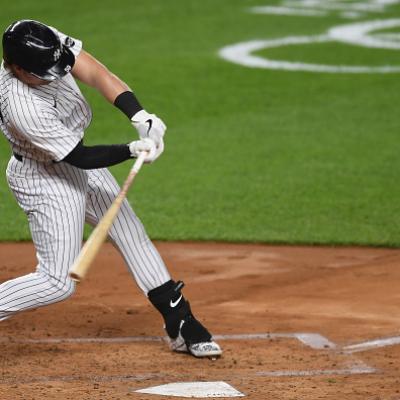 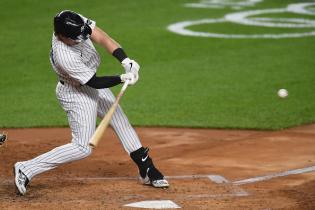 N. Pivetta - RP
BOS
Nick Pivetta could make his Red Sox debut on Tuesday against the Orioles.
While Red Sox manager Ron Roenicke wouldn't confirm it, he didn't deny it either when asked about it by reporters on Tuesday, stating "You guys have it figured out pretty good." If that is indeed the case, he would also be in line to pitch the season finale against the Braves in Atlanta next Sunday. By waiting until now, the Red Sox guaranteed themselves another year of control over the 27-year-old right-hander, delaying his free agency until after the 2024 season.
Added 9:06 pm (EST)
Added 9:06 pm (EST)

A. Verdugo - RF
BOS1
Alex Verdugo was removed from Friday's game against the Yankees for precautionary reasons due to left hamstring tightness.
It sounds -- at least initially -- as though Verdugo was able to avoid serious injury here and the Red Sox were merely being cautious. Pay attention to his status on Saturday, but it sounds like Verdugo should return to action before the end of the weekend.
Added 8:42 pm (EST)
Added 8:42 pm (EST)

A. Verdugo - RF
BOS1
Alex Verdugo was removed from Friday's game against the Yankees with an apparent hamstring injury.
Verdugo legged out an infield single in the third inning and eventually was thrown out at third on a fielder's choice, but he appeared to tweak something along the way and was seen limping into the clubhouse with the trainer. Expect the Red Sox to provide an update on his status as soon as one becomes available.
Added 8:24 pm (EST)
Added 8:24 pm (EST)

T. Pham - LF
SD1
Padres activated OF Tommy Pham from the 10-day injured list.
The Padres kept saying that he was close to a return and would be back soon, and they obviously weren't kidding. Pham will jump right into the Padres lineup, batting sixth and functioning as the team's designated hitter against Yusei Kikuchi and the Mariners on Friday night.
Added 7:51 pm (EST)
Added 7:51 pm (EST)

A. Stevenson - LF
WSH
Andrew Stevenson went 1-for-3 and drove in two runs as the Nationals defeated the Marlins 5-0 in the first game of Friday's doubleheader.
Stevenson delivered a two-run single off of Sixto Sanchez in the fourth inning that extended the Nationals' lead to 4-0. It was the 26-year-old's first hit with the big league club this season. He's now 1-for-8 (.125) with an RBI and a stolen base in his limited action this season.
Added 7:25 pm (EST)
Added 7:25 pm (EST)

A. Stevenson - LF
WSH
Luis Garcia had a nice day at the dish in Friday's victory over the Marlins, going 2-for-3 with an RBI double and two runs scored.
Garcia got the Nationals on the board with a run-scoring double off of Sixto Sanchez in the second inning. He also singled and scored in the fourth inning. The 20-year-old has not been over-matched in his first exposure to big league pitching, slashing .296/.317/.408 with two homers, 11 RBI and a stolen base in his first 28 games. He has probably shown enough to open the 2021 season as the Nationals' starting second baseman.
Added 7:25 pm (EST)
Added 7:25 pm (EST)

Y. Gomes - C
WSH
Yan Gomes went 2-for-4 and scored a pair of runs on Friday as the Nationals topped the Marlins in the first game of their doubleheader.
Gomes singled and came around to score the Nationals' first run on an RBI double by Luis Garcia in the second inning. He then singled and dashed home on Andrew Stevenson's two-run single in the fourth. With the two-hit attack, Gomes is now hitting a healthy .282/.323/.471 with three homers and 11 RBI on the season.
Added 7:25 pm (EST)
Added 7:25 pm (EST)