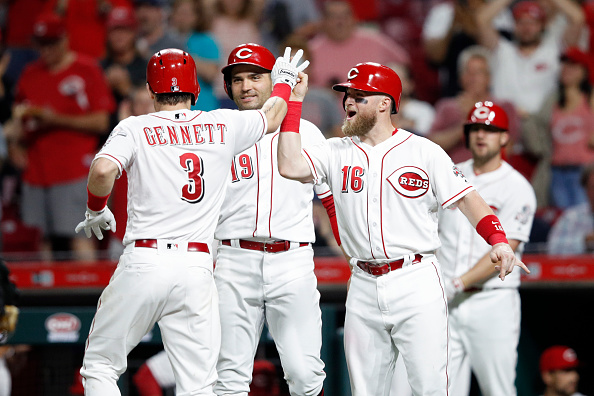 Below are stacks to consider for Tuesday’s MLB DFS action

Over the last 30 days the Tampa Bay freakin’ Rays lead the league in park-adjusted offense with a 127 wRC+. Knowing that makes it easier to understand why they have the highest projected run total of the night according to Vegas. They easily have the highest run total as the next highest projected total is four-tenths of a run lower than Tampa. In addition to being hot, Tampa is getting a positive park shift on the road in Texas, where temps are over 90 degrees tonight, against right-hander Yovani Gallardo who has a 6.67 ERA in 79.2 innings this season.

Tampa’s best hitters in the lineup tonight against right-handed pitchers are left-handers Ji-Man Choi and Joey Wendle , who have both been at least 10 percent better than league average against righties. Choi has been particularly good against righties with a 147 wRC+ vs. RHP. Those two lefties will hit third and first in the order tonight, respectively. Sandwiched between them in the two- and four-holes are right-handers Matt Duffy and Tommy Pham , both of whom have been safely above average without the platoon advantage this season.

The Brewers and the Indians are the only other teams with a projected run total over five runs tonight. The Indians are facing Carlos Rodon who has held active Indians to a combined .220 wOBA in a total of 120 PA against them, so the Brewers seem like the better choice. Milwaukee is facing right-hander Michael Lorenzen .

The chalkiest of chalk picks is Christian Yelich who is piping hot and who owns a 159 wRC+ vs. RHP this season. Curtis Granderson will lead off in front of Yelich, and he has a 127 wRC+ vs. RHP. In the cleanup spot is Travis Shaw who is second on the team in wRC+ vs. RHP. That’s the core of any Milwaukee stack. In the five-hole you have Jesus Aguilar who is third on the team in wRC+ vs. RHP despite being right-handed himself and hitting sixth is lefty Mike Moustakas who has a 114 wRC+ vs. LHP. The Milwaukee lineup is loaded with options for stacking.

How about Milwaukee’s opponent as a stack option for a game stack there? The Reds have the 10th lowest projected run total tonight, so they’re certainly not the chalk.

Milwaukee will send right-hander Chase Anderson to the hill tonight, and Anderson is coming off a 5.61 ERA in August. Anderson’s ERA is 1.93 in September, but both his strikeout and walk rates are worse this month than they were last. Anderson leans toward the fly ball end of the spectrum as one of only six starters going tonight who has allowed more fly balls than ground balls this season. Anderson also has the ninth highest hard contact rate allowed among tonight’s probables and the 10th lowest strikeout rate.

Cincy has three left-handed hitters in the top four spots in the order who have all have a wRC+ vs. RHP this season over 110: Joey Votto (146), Scooter Gennett (136) and Scott Schebler (113). Right-hander José Peraza is sandwiched between that trio in the two-hole, and six-hole hitter Phillip Ervin could also be included. Ervin is another lefty, and he has a 107 wRC+ vs. RHP this season, which includes a home run in one of his two at-bats against Anderson.