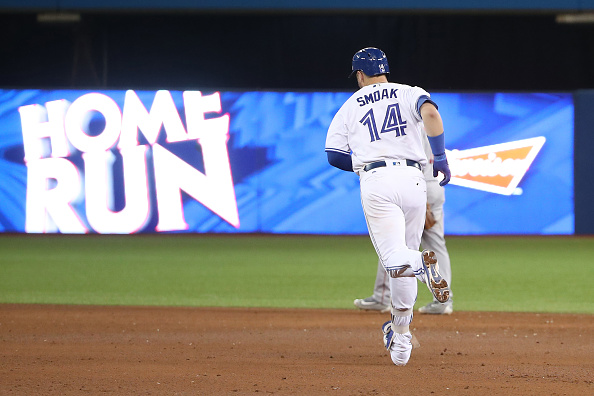 Below are stacks to consider for Sunday’s MLB DFS action.

There are four games tied for the highest over/under of the day at nine runs. In three of those games there is a big favorite with Cleveland only being a slight favorite in a semi-tough matchup against Marco Gonzales . The three big favorites in those games are Baltimore, Toronto and Minnesota. Boston also figures to be a big favorite against a Tampa with Matt Andriese on the mound. That game has no line in Vegas, but the Red Sox are likely to be a chalky pick as well.

The O’s will face Detroit with left-hander Daniel Norris on the mound. Norris struggles just as much with same-handed hitting as he does against right-handers, so you don’t have to stick to O’s with the platoon advantage. However, their four best hitters against left-handed pitching dating back to last season are right-handers: Manny Machado , Danny Valencia , Trey Mancini and Adam Jones . Baltimore faced a left-handed starter yesterday and those four hit 1-3-4-5 in the order.

The Blue Jays are one of the biggest favorites of the day at-210 against Martín Pérez and the Rangers. Unlike Norris, Perez does have significant platoon splits, so you will want to stick to Toronto right-handed hitters. Toronto has five hitters who have been at least 10 percent better than average against left-handed pitching since the start of last season and all five are right-handed or switch-hitters: Justin Smoak , Kendrys Morales , Devon Travis , Kevin Pillar and Steve Pearce .

The Twins have the toughest matchup of these three big favorites against Tyler Mahle and the Reds. Mahle has a 5.00 ERA through five starts this season, but his xFIP sits at 3.48 thanks to a 27 percent strikeout rate and a respectable 7.8 percent walk rate. That said, the Twins have eight hitters who have been above average against right-handed pitching dating back to last season, which should make them an easy team to stack.

Dating back to last season, Ian Kennedy has the lowest soft contact rate and highest hard contact rate out of any of today’s probable starters. The White Sox have the pleasure of facing Kennedy today, so they’re a solid stack option. José Abreu and Matt Davidson both have good career numbers against Kennedy, so they’re a good pair to build a Chicago stack around. Yoan Moncada and Nicky Delmonico , along with Abreu, have been Chicago’s best hitters against right-handed pitching since last season. Welington Castillo and Yolmer Sánchez have also been above average against right-handers in that time frame.

As mentioned above, the over/under in the Cleveland game is nine runs, and the Indians are only a slight favorite. Their opponent, Seattle, is perhaps the more interesting stack option in that game and could potentially see lower ownership than Cleveland. Josh Tomlin will start for the Indians, and his 6.56 xFIP this season is the worst among any of today’s probable starters.

Lefties Robinson Canó and Kyle Seager have hit Tomlin well in their career with each owning five extra-base hits against him in 20 and 14 PA, respectively. Seattle’s best hitters against right-handed pitching since the start of last season have been Nelson Cruz and Mitch Haniger who each have a 147 wRC+ vs. RHP in that time. Mike Zunino and Jean Segura have also been above average against righties and could be included in the stack.