Brandon Marianne Lee continues her Stats You Need to Know series with the NFC North teams in order to help you make those tough decisions you'll face on Draft Day for you fantasy football league. 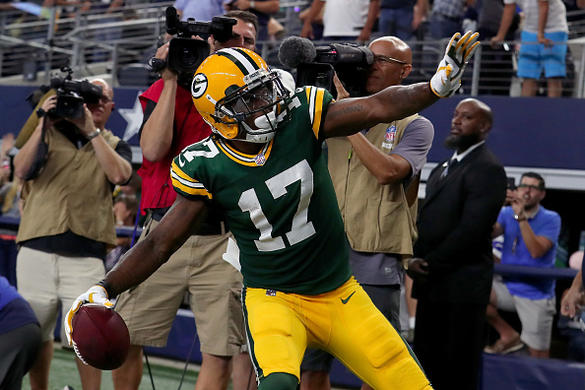 There is a distinct possibility that the NFC North will be the best division in both real and fantasy football.

There’s the nice draw of getting to play the AFC East this year. Then there’s the nice consistency with the good stuff, and the changes for the bad stuff.

Good stuff = Aaron Rodgers , Vikings wide receivers, Jordan Howard beasting with all the defenders in the box, getting to say the name Jim Bob Cooter.

Here are the stats you need to know about the NFC North heading into the 2018 season.

Only five games in NFL history had a final score of 2-0. Two of those games were the Packers vs. Bears.

On December 12, 1965, Chicago Bear Gale Sayers tied Dub Jones with the most touchdowns in a single game (6). What most people don’t know is that Green Bay...

S. Griffin - LB
SEA
Seahawks LB Shaquem Griffin "looms" as a player on the roster bubble heading into training camp, according to the Seattle Times' Bob Condotta.
The third-year linebacker is the twin brother of starting outside corner Shaquill Griffin, but Shaquem has not claimed a starting role after two seasons in the NFL. Over the last two drafts, the Seahawks have spent three picks on his position, including 2020 first-round pick Jordyn Brooks and 2019 third-round pick Cody Barton. Griffin might need to carve out a pass rushing role in order to make the 53-man roster. Condotta notes increased practice squad numbers, ranging anywhere from 12 to 16 players, likely means Griffin remains a part of the Seahawks in some fashion.
Added Jul 09 6:37 pm (EST)
Added Jul 09 6:37 pm (EST)

L. Shenault - WR
JAC
Jaguars signed second-round WR Laviska Shenault to a four-year contract.
Head coach Doug Marrone claims Shenault will play numerous positions: wide receiver, tight end, wildcat quarterback and see manufactured touches out of the backfield. It is the type of statement that looks good on paper, but often fails to fulfill its promise. Shenault is at his best with the ball in his hands and was frequently able to show off that skillset at Colorado, as 75% of his catches were made less than 10 yards downfield last season. D.J. Chark remains a great bet to lead the team in targets, but Shenault could offer a secondary spark on a handful of touches per game.
Added Jul 09 4:44 pm (EST)
Added Jul 09 4:44 pm (EST)