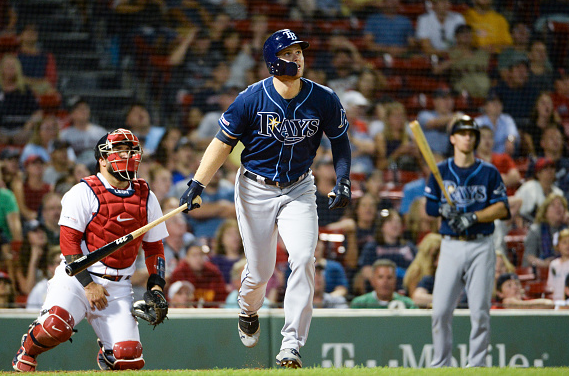 Now that the LABR auctions are in the books and the “industry” prices have been set, we can use these benchmarks to do some auction analysis. I did an exercise last year that I thought was helpful and will run through it again. Let’s take a look at what 55 dollars can buy you if you had to spend it on only two players using the actual prices these players cost in the mixed league LABR auction. I chose 55 last year as I was listening to Sammy Hagar’s “I Can’t Drive 55” and the number worked well. The projections used are Howard Bender’s from the Fantasy Alarm Ultimate Draft Guide.

We start with who is now the first player most frequently taken in NFBC and Mock Draft Army drafts. Ronald Acuña Jr. went for 48 dollars and some thought this was “cheap” as there were 55-60 dollar expectations out there. He was priced at $45 in our guide and he falls in a range that we expected. There were a few players who went for $7 and we’ll use three of them to see how they pair up with Acuña.

Scott Kingery continues to climb draft boards and his price of $7 was right in line with our price. Some of Kingery’s projections may be a little low and if he is able to lock down a full time starting job there is a chance he outperforms them. His pairing with Acuna provided the second most stolen bases of all the pairings but fell short in runs, homers, and RBI.

Carlos Santana gives us the most runs and highest batting average for the Acuna pairings, and is in the middle for homers, RBI and stolen bases. He fell short of our price of $11 and could be a slight bargain here.

Khris Davis , who is coming back from injury, will provide the most homers and RBI but will drag the average down and give you no additional speed. His price was in line with our $8 price.

When you take into consideration our expected prices Santana should and does provide the best overall fit with Acuna. Kingery and Davis fall short in at least 2 of the 5 categories.

Mookie Betts went for $36 which was a 10% discount from our price of $40. These discounts are what you look for in an auction and his pairing with $19 players should be better than if it were with the $15 players we would have expected. With a $12 difference in price from Acuna, there should be a significant difference in who we see Betts paired with. Again there was a trio who went for $19 and here’s where the numbers landed.

Austin Meadows looks like a superstar in the making and his price of $19 is well below our price of $27. Meadows is our 10th ranked outfielder and this appears to be a major bargain. The pairing with Betts provides the top combo in all categories except stolen bases making them easily the best pairing of this group.

Whit Merrifield offers us stolen bases, runs and average. His power numbers are lacking as are those of Victor Robles . Their price of $19 is higher than ours.  We have Merrifield at $12 and Robles at $13.  What this shows is one of two possibilities: that stolen bases were valued more in this auction or that the discounts that we saw with the top end players has caused some inflation in the middle to lower tiered players.  All of the budgeted $3120 has to be spent and if there are discounts for some, inflation for others must follow.

Now we have some single pairings to look at. Christian Yelich who went for $47, $4 above our price, is paired up with an $8 Michael Brantley who came at a $5 discount as we have him at $13. A combo that comes at $1 discount which is basically what we expected.

This duo gives us the highest combined batting average, second highest RBI total and are solid in all the other categories. This pairing is strong overall which can be attributed to Brantley’s discount but with being an Astro, you must question how he’ll produce in comparison to expectations. There are a lot of people out there who think most, if not all, of the Astros will struggle this year due to the pressures of the cheating scandal.

JD Martinez was bought for $30, matching our price in this 12 team, mixed format. His $25 companion is last year’s AL rookie of the year Yordan Alvarez , whose price is just below our $27 price tag. Paying “full price” in an auction is not detrimental as long as you meet your categorical targets, but of course discounts are where you gain an advantage.

This pair leads all combos in homers and RBI, is second in batting average but there is absolutely no speed.  This is your power combo but it leaves you vulnerable in the steals category which you’ll have to find elsewhere.

The last pair we’ll look at is Anthony Rendon and JT Realmuto who were $28 and $27 respectively. Personally I would never pay that much for Realmuto and we have him priced at $16. He’s a great catcher but to pay two more dollars than for Alvarez is money not well spent in my opinion. Some may argue that position scarcity comes into play here but I’m still not overspending that much on a catcher.  Rendon comes at a discount here as we have him at $34.  This was another contributor to the surprising discounts seen in this draft.

This combo doesn’t lead in any of the categories, but is strong across the board except for steals.  This is what you’d expect with two very good players going in the 20s.

If we give each pairing a roto style ranking in each category the standings would be:

When just looking at the numbers before I ranked them, I thought the Martinez/Alvarez pair would easily finish first but their last place stolen base total kept them from the top.  The Yelich/Brantley and Betts/Meadows pairs were solid in all categories setting up the close finish amongst the three with Yelich and Brantley prevailing by a half point.

As you can see there are many different ways to spend your money in an auction. The key to winning is to get bargains at any point in the draft. Don’t have your mind set on this guy or that. When you see a player is going to go for less than you have him projected to, pounce on him. Last year I had Freddie Freeman as a 38 dollar player. Getting him for 33 allowed me to spend five dollars elsewhere and upgrade another slot.

Just to be clear none of these combos fell to the same team. The exercise is helpful in showing that there are many ways to go in an auction and just because you get a high priced player doesn’t guarantee it will be advantageous due to the price points you will have to shop at later on. The high priced Yelich combo did end up first but none of the Acuna combos finished near the top. I believe the combination of JD Martinez and Yordan Alvarez was overall the best despite the lack of speed. As always I can be found on twitter @gasdoc_spit if you have any questions.