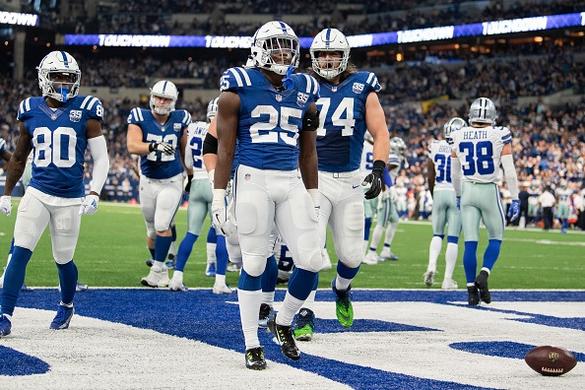 After two weeks of almost everyone moving on, we had the third highest percentage of losing picks in week 9 with 20% going down in the Yahoo pool.  If you took a home team, you’ve moved on as all home teams won last week.  The Packers were the biggest offenders losing in LA to the Chargers.  Week 10 has a couple of chalky plays but one of them got interesting with the possible loss of their QB.

The Colts opened up as 15 ½ point home favorites over the visiting Dolphins but with Jacoby Brissett’s MCL injury possibly giving the start to Brian Hoyer, the line has dropped to 10 at Westgate.  The Colts are still a prohibitive favorite and they should have beaten the Steelers on Sunday but were let down by an old leg for the third time this season.  Having TY Hilton on the sidelines also doesn’t instill a boatload of confidence in reeling in the fish.  Miami is coming off its first win of the year over the hapless Jets and Brian Flores was probably told “OK, you got your win but don’t let it happen again”.  This was the week we all had targeted for taking the Colts.  Should we? I think this may be the closest we come to a game time decision this year.

In New Orleans we have the Saints coming off their bye and are supposed to be getting Alvin Kamara back from his ankle injury.  They are playing the lowly Falcons at home and are the biggest favorites of the weekend with the spread being 13.  It’s a divisional game which is the only hesitation and the Falcons coaching staff is desperate.  Matt Ryan looks to be on track to return to the lineup after his ankle injury held him out in week 8 before their bye.  The Falcons have looked awful and their only victory was secured by the infamous “Not like Agholor” drop in week 2.  The Saints look like a lock here.

The only other team favored by more than 7 are the Ravens in Cincinnati.  The Bengals are 10 point dogs at home and are benching Andy Dalton in favor of Ryan Finley.  The problem here is that most people have already used the Ravens. I checked my local pool where I can see everyone’s picks for the season, and only 2 of the remaining 50 teams that have no losses have not taken Baltimore yet. If you haven’t used them, this may be a good place to take that leap. It actually puts you in a great contrarian position if one of the other favorites lose as the Ravens ownership will be extremely low.

We don’t have the Redskins to pick on this week, but we do have the Jets.  The problem is they play the 2-6 Giants.  The Jets opened as 1 point favorites but now the line has swung and the Giants are favored by 2 1/2.  It’s a Jet home game but we know it’s not really a road game for the Giants.  After the loss to the Dolphins last week, it will not be a friendly environment for the Jets despite the home game.  The fans will be unruly.  “Fire Gase” chants will be said more frequently than the J-E-T-S chant.  I wouldn’t be surprised for the Jet fans to root for the Giants to help speed up the Gase process.  Can we see the return of paper bags?  It’s a spot where taking the Giants is a risk but using a 2-6 team this late in the season can go a long way in winning these pools.  A lot depends on who you have left to take the rest of the season, how large a pool you’re in, how many people are still alive, etc.  I may take the risk in one of the larger pools I’m in to try to gain an advantage, especially if Bell is out.  Not that Gase has used him to his potential, but any time a team loses one of its best players, it puts them at a disadvantage and that’s just icing on the cake for the reeling Jets.

So what do we do in week 10?  The Colts are projected as the most likely team to win this week at 84%.  The Saints are next at 78% and the Ravens check in at 72%.  Over the remainder of the season the Colts do not exceed 70% and the Saints continue to be favored in all their remaining games.  All roads point to the Colts as I wrote in my week 4 write-up that I was saving them for this game.  If you have the Ravens available, which I do not, I would go with them despite them being on the road, as they are not over a 60% favorite until week 15.  The Saints will be chalky as well but they have some favorable matchups upcoming and could be saved for one of those.  Do you risk taking the Giants?  If you’re in the Yahoo pool or another similar large one with thousands of entrants still in it, you have to consider taking the risk at the Meadowlands.  The pick: INDIANAPOLIS. This is a week where you should wait until Sunday morning to make your selection to see what the updates are on Brissett and Bell.  The Saints are the pivot off the Colts if you are worried about Hoyer leading the way.

C. Jones - DL
KC
ESPN's Jeremy Fowler reports there hasn't been "much traction" on a long-term agreement between the Chiefs and unsigned franchise player Chris Jones.
Fowler does report that Jones has "kept in touch with the Chiefs as they hold virtual meetings." Absent a long-term agreement before the July 15 deadline, Jones will probably skip the majority of training camp.
Added Yesterday 7:57 pm (EST)
Added Yesterday 7:57 pm (EST)

E. Apple - DB
NO
Panthers signed CB Eli Apple to a one-year contract.
It's been 56 days since Apple's Raiders deal fell apart, and 71 days since he first agreed to terms with Las Vegas. Apple's public interest had been dead silent since the Raiders backed out of their agreement, but it is impossible to know what goes on behind the scenes of the coronavirus-affected market. Even though former first-rounder Apple has mostly been replacement-level to this point in his career, it's a nice addition for the Panthers' undermanned and unproven cornerback group. Apple is still three months shy of his 25th birthday despite entering the league in 2016. He could be a 1,000-snap player in Charlotte.
Added Yesterday 7:36 pm (EST)
Added Yesterday 7:36 pm (EST)

M. Judon - LB
BAL
Ravens re-signed LB Matt Judon to a one-year, $16.27 million contract.
Judon was labeled as a tag-and-trade possibility, but the draft came and went with nary a peep about Judon moving. Perhaps the Ravens would rather just go all in on 2020. The sides still have well over a month to come to a long-term agreement. Judon is no one's idea of a truly elite pass rusher, but he has 24.5 sacks over the past three seasons. Seeing as Judon is already going on 28, it wouldn't be shocking were the Ravens to let Judon walk after playing out his one-year tender.
Added Yesterday 7:32 pm (EST)
Added Yesterday 7:32 pm (EST)

E. Apple - DB
NO
Panthers signed CB Eli Apple to a one-year contract.
It's been 56 days since Apple's Raiders deal fell apart, and 71 days since he first agreed to terms with Las Vegas. Apple's public interest had been dead silent since the Raiders backed out of their agreement, but it is impossible to know what goes on behind the scenes of the coronavirus-affected market. Even though former first-rounder Apple has mostly been replacement-level to this point in his career, it's a nice addition for the Panthers' undermanned and unproven cornerback group. Apple is still three months shy of his 25th birthday despite entering the league in 2016. He could be a 1,000-snap player in Charlotte.
Added Yesterday 5:56 pm (EST)
Added Yesterday 5:56 pm (EST)

D. Hopkins - WR
ARI
Speaking Thursday, DeAndre Hopkins said he expects to post better numbers in Arizona.
"So myself, being a receiver, of course I see my stats going up," Hopkins said of Kliff Kingsbury's pass-friendly attack. "But I definitely see myself having one of my more productive seasons." Hopkins slumped to three-year lows across the board last season as the Texans seemed oddly stagnant on offense. Hopkins fills a massive need as a bonafide No. 1 receiver for Kingsbury and Kyler Murray. The Cardinals want to run four-wide attacks and get the ball down field. Personnel made it difficult to do in 2019. Hopkins changes the game for 2020. He's a safe top-five option at wide receiver, with the upside for a No. 1 overall finish.
Added Yesterday 4:51 pm (EST)
Added Yesterday 4:51 pm (EST)

P. Mahomes - QB
KC
The NFL announced Thursday that EA Sports will remain its exclusive video-game producer through at least 2025.
The NFL actually opened up the bidding this time around, but EA will remain the league's exclusive home, as it has been since an agreement was struck in 2004. NFL spokesman Brian Rolapp said the competition was not close. “EA made the most compelling case,” Rolapp said. "And beat out the competition pretty soundly.” EA reportedly unveiled a “plan of innovation for the next handful of years." A lack of innovation has been a common criticism, but too much innovation leads to things like the vision cone. Hopefully a happy medium can be found in the next few years.
Added Yesterday 4:37 pm (EST)
Added Yesterday 4:37 pm (EST)

N. O'Leary - TE
LV
Raiders placed TE Nick O'Leary on the reserve/NFI list, ending his season.
It means O'Leary got hurt working out on his own. O'Leary was signed as offseason depth on March 21. His loss won't be felt in the Raiders' deep tight end corps. Provided he is not dealing with something like a torn ACL or ruptured Achilles' tendon, 27-year-old O'Leary will likely end up getting cut loose with an injury settlement.
Added Yesterday 4:35 pm (EST)
Added Yesterday 4:35 pm (EST)

J. Hill - RB
BAL
Speaking in a Thursday Zoom session, Ravens coach John Harbaugh said he envisions roles for all four of his running backs.
That is Mark Ingram, J.K. Dobbins, Gus Edwards and Justice Hill for those keeping score at home. Harbaugh's comments came in the context of discussing Hill, whom he said he expected to "make a big jump" in 2020. "Is that really a problem?" Harbaugh asked rhetorically. "Having four guys who can break long runs and make guys miss?" They're encouraging comments for those holding onto Hill in dynasty leagues, but the reality is, it is going to be very tough for Hill to carve out a meaningful role behind Ingram and Dobbins, especially since Dobbins can also catch passes. Lamar Jackson also barely targeted his running backs in 2019. Hill remains six months shy of his 23rd birthday, but his role in the Ravens' scheme of things is hard to spot right now. He needs to run circles around Dobbins on third downs this summer.
Added Yesterday 4:24 pm (EST)
Added Yesterday 4:24 pm (EST)