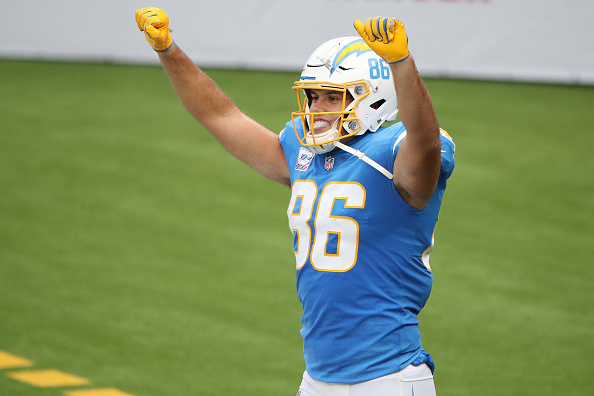 A number of players have already landed at this point so let’s take a look at who’s left for pass catching tight ends and where we’d like to see them go for fantasy purposes. First, here are all the tight ends that have landed somewhere already as of the writing of this article.

Blocking tight ends are great for the run game but aren’t particularly exciting for fantasy purposes. Not to mention, most teams can use blocking at any given time so predicting landing spots can be difficult. One thing to note is that, if you own certain tight ends in dynasty like Dallas Goedert or Irv Smith Jr., and the depth chart is currently thin, you are rooting for the team to fill out that tight end room with a non-threatening blocking tight end like Antony Auclair or MyCole Pruitt to ensure that your tight end is the best pass catcher in the room. For instance, if the Eagles want to continue running two tight end sets after they move on from Ertz and you own Goedert, you want them to bring on a guy like Geoff Swaim to play Goedert’s role while Goedert moves into Ertz’s. The last thing you want is for them to bring on a guy like Trey Burton or, god forbid, rookie Kyle Pitts, because Goedert is one of the top blocking tight ends in the league and the nature of that alone would keep him in his in-line role, which isn’t ideal for fantasy.

Anyway, let’s move on to the exciting part: the pass catchers. We’re first going to provide some info on them that helps determine if they truly are threats in the passing game. That includes measurables (size, speed), alignment (how often they are asked to pass block, how often they line up in the slot), and some stats (average depth of target, yards after the catch per reception).  After that we’ll break down some potential landing spots that might make them relevant for us in fantasy football.

Jacksonville Jaguars - This is the most obvious landing spot out there. Tyler Eifert was their pass catcher last year but he’s more of an ancillary piece than a true starter at this point in his career. They just traded their tight end prospect Josh Oliver to the Ravens for a conditional seventh round pick. And the tight end they brought in so far, Chris Manhertz , is a primary blocking tight end, blocking on 39.5% of his pass plays last year in Carolina and only catching six passes. This team needs to do something in terms of a pass game threat.

Houston Texans - The Texans said so long to long time tight end Darren Fells (who is more of a blocker anyway). They traded for Patriots tight end Ryan Izzo who only had ~200 yards all season (and 50 of those yards came on a Hail Mary which he caught then promptly fell to the ground, ending the game). Jordan Akins has been serviceable in the pass game despite a couple drops but he’s better suited for the in-line blocking role that Fells occupied. Despite the issues with the team, this is actually a highly intriguing landing spot for fantasy because of the target void behind Brandin Cooks , the key to tight end success in fantasy is being a top two target on the team, as we’ve heavily covered in the past.

Cincinnati Bengals - The Bengals haven’t seen a dominant pass catching tight end season since Tyler Eifert caught 13 touchdowns in 2015. Drew Sample is a primary blocking tight end.  Fellow blocking tight end Cethan Carter just left for Miami so they have a hole in the depth chart as is. CJ Uzomah is the best pass catcher on the team but, not only has he not exactly impressed in that facet, but he’s now coming off a torn achilles tendon which is one of the more brutal injuries in football. They already have two solid pass catchers in Higgins and Boyd so it’s not the most attractive spot for fantasy target-wise but it would serve them well to bring in a pass catching tight end for the young quarterback Joe Burrow.

Indianapolis Colts - The Colts use multiple tight ends as part of their system but they are pretty good about letting them run free on pass plays. Even the more blocking heavy tight ends like Jack Doyle and Mo Allie Cox only blocked on 5.5% and 8.8% of their pass plays, respectively.  But, when Trey Burton was healthy, he was clearly the primary pass catcher and the other two were relegated to more blocking downs. They could probably survive with what they have, with the former VCU basketball player Mo Allie Cox taking a bigger pass catching role, but any one of the players above would be the best pass catching tight end on the team from day one.

Tennessee Titans - The Titans have Anthony Firkser (who might actually be a sleeper for fantasy right now if he can absorb a good chunk of Adam Humphries ’ slot snaps). Jonnu Smith is gone and both Geoff Swaim and MyCole Pruitt are free agents. If they fill out the room with blocking tight ends, it’s wheels up for Firkser, but they could bring in another capable tight end in the pass game who also blocks. Firkser ran routes on almost 75% of his snaps so not considered a reliable blocker. In fact, no tight end in the league blocked on a lower percentage of pass plays than him (0.9%). If you can make moves in your leagues now, he’s honestly an interesting player to stash at the end of your bench just to see how that offense shakes out since right now, he could be the second target in that pass attack behind AJ Brown.