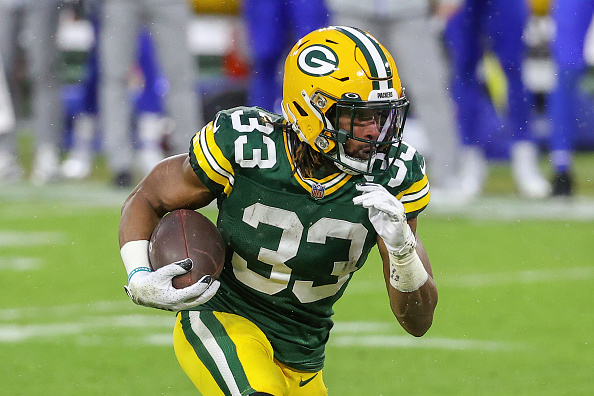 In the first article of this free agency preview series we broke down the available wide receivers in terms of split end, flanker, and slot and gave you some potential landing spots. But wide receiver isn’t the only position that is no longer a linear depth chart in the modern era. Running back as well has become more of a committee game in recent years. The days of Priest Holmes, Ladanian Tomlinson, and Marshall Faulk touching the ball 500 times a season are long gone at this point - it’s just not sustainable. I know that might bother a lot of you fantasy gamers out there but that’s a fact of life and you can probably blame Bill Belichick.

Today’s reality is that the “every down” backs like Saquon Barkley or Christian McCaffrey are becoming rarer and rarer. With that you end up with essentially three types of RB - three down workhorses, power running backs, and passing down backs (or satellite backs). As I alluded to in the last paragraph, some teams like the Patriots even treat them like completely separate positions on the depth chart - the Patriots have not had a running back get both 200+ carries and 35+ catches during Bill Belichick’s entire tenure. The last player to do it for New England was rookie Robert Edwards in 1998 when Pete Carrol was coach. Some may remember that his career essentially ended when he tore his knee up because the NFL decided it was a good idea to have an all-rookie touch football game IN THE SAND, ON THE BEACH.

So, as with the first article, we are going to do our best to separate out the types of back you are looking at by the role they are most likely to play with their new team. Now, a lot more goes into these designations and tiers such as pass blocking data, historical usage, coaching schemes, college production etc. and we can’t provide every data single data point but we did provide the following which are useful in determining likely position: measurables (age, size, speed via the forty yard dash), historical alignment info (percentage of pass or run plays), and some per snap statistics (as opposed to counting totals which are less effective when it comes to guys changing teams and possibly having either an expanded or decreased role). For stats we’ve included True Yards Per Carry (courtesy of PlayerProfiler.com), which takes out runs over 10 yards in attempt to better illustrate consistency, and targets per route run which gives us a better look at pass utilization by showing how often the ball is actually coming their way when they are on the field. For that, the higher the number, the better (for instance, Alvin Kamara and Nyheim Hines got nearly 0.30 targets per route run last year which is awesome while Jordan Howard had 0.04 targets per route run and finished with a comical negative three yards receiving).

Now, before anyone gets too worked up here, I just want to be clear that being on this “three down back” list vs. one of the others doesn’t mean these guys are all more valuable than the rest of the RBs in real life or fantasy football. It just means that they have shown they have a balanced skillset. That doesn’t mean their balanced efforts don’t make them candidates to be a second or third string running back behind another balanced RB. That said, if a RB with this skillset can get the starting job on a team that uses a one back system, they can absolutely rack up fantasy points even if they aren’t necessarily viewed as highly talented out of the gate (e.g. Mike Davis , James Robinson, Myles Gaskin).

Three Down Back Landing Spots

Miami - Brian Flores showed us something important this year. When Myles Gaskin was healthy, he was the guy full time. When he was hurt, Salvon Ahmed was the guy. Then Gaskin had the full job when he came back. This is important because Brian Flores is a Bill Belichick coaching tree guy and we already explained why Belichick is basically the devil when it comes to fantasy football running backs. Gaskin is a 7th round pick and Ahmed is an undrafted free agent so this team hasn’t spent a ton of capital at the position so far in their rebuild but they have a ton of money and picks. Prime.

Jacksonville - The entire fantasy community (especially Reddit) fell in love with James Robinson last year and for good reason as he produced. But a lot of that was the combination of the unexpected jettisoning of Leonard Fournette and Ryquell Armstead missing the entire season with COVID complications. At the very least they need to bring in some depth but Robinson is also an undrafted free agent and sometimes it turns out that it was the opportunity all along more than talent with guys like that. This team has the most cap space of any in the league so no one is off the table. If you are a Robinson owner in a dynasty, you just have to hope the guy(s) they bring in are for depth rather than to actually compete for the starting gig.

New York Jets -  As we just mentioned, the Jags have the most cap space. This team has the second most. The depth chart is basically Lamical Perine (who promptly got hurt as soon as they said he was going to get a bigger workload) and a bunch of journeymen. The Jets are poised to nab an RB and running behind the absurdly large, 6’7”, 364 pound Mekhi Becton isn’t necessarily a bad place to be.

Arizona - Kenyan Drake is a free agent so Chase Edmonds is currently at the top of the totem pole. He’s seen action via the ground and air so it would make sense for them to compliment him with another balanced player. Be warned though - Andrew Erickson over at FantasyData.com showed mathematically that mobile quarterbacks target the running back less and we saw it first hand with Kenyan Drake and Kyler Murray last season. So perhaps not the ideal landing spot for fantasy football that some believe it to be.

Carolina - Mike Davis probably played well enough in Christian McCaffrey ’s absence to earn himself a gig somewhere else. Given McCaffrey’s skillset and the money committed to him, they likely will find another three down back to spell their workhorse. Would make all the sense in the world to just bring Davis back if it were affordable.

Kansas City - They don’t have a ton of money and, with LeVeon Bell and Darrel Williams hitting free agency, they don’t have a lot of depth behind Clyde Edwards-Helaire. Expect a depth move or two here, likely in the lower tier. The system Andy Reid and Matt Nagy setup there is based on balance and deception so expect another dynamic back that can operate in both phases.

Atlanta -  Another team that doesn’t have a lot of money or a ton of running back depth. They likely need to do something about the position but don’t expect a big splash.

Other teams who could use a three down RB: New York Giants, Pittsburgh, San Francisco

Some running backs simply are not dynamic in the pass game. Jordan Howard will tell you himself that he’s had trouble with it since high school. But that doesn’t mean you can’t be a productive player on the ground. Ask Derrick Henry or 2016 LeGarrette Blount , scoring 18+ touchdowns while catching less than 20 balls. Running backs who vulture touchdowns can be annoying for fantasy unless they do it consistently but guys like don’t really care about your fantasy team.

Denver - Phillip Lindsay ’s biggest weakness has always been pass blocking, ranking #81, #141, and #122 among running backs in pass blocking per PFF the last three years. Insert Melvin Gordon to solve that problem. Given Gordon’s skill set, the best way to compliment him would be a power back to help carry the load. The Broncos are top 10 in available cap space.

Los Angeles Chargers - Austin Ekeler may be shredded but at 5’8” ~200 pounds he’s not exactly huge. And Justin Jackson is also sub 200 pounds. They drafted Joshua Kelley but got mixed results from him so I could see this team splashing a little on a short yardage guy. They have the seventh most cap space.

Washington - JD McKissic proved a reliable pass catcher out of the backfield with 100 targets and Antonio Gibson is a young, well rounded player. Could see them signing a low end plodder to help round out the depth chart rather than wasting draft capital on the role.

Detroit - This team isn’t in a great spot cap wise but they are also losing Adrian Peterson . D’Andre Swift was dynamic in the pass game and Kerryon is big enough to handle a lot of power work but they should fill that roster out with someone else who can carry the load.

Other teams who could use power backs: New York Jets, Carolina, Seattle, Pittsburgh

New England - We’ve mentioned this enough but for 20 years they have utilized this role. Heavily. Notable examples have been Kevin Faulk, Danny Woodhead , Dion Lewis , James White , Rex Burkhead etc. With White and Burkhead hitting free agency and Sony Michel and Damien Harris never having more than 12 total catches in a season, you’d have to predict them to completely change their system for them not to bring someone in. They’ve run the same modified Erhardt Perkins offense since the days of Charlie Wise so I’ll put my money on them staying the same, likely bringing James White back. But who knows.

Green Bay - It doesn’t take a genius to figure this one out. Aaron Jones , Jamaal Williams , and Tyler Ervin are all free agents and the 247 pound AJ Dillon wasn’t exactly drafted for his pass catching chops. They are right up against the cap so it probably makes more sense to supplement Dillon with a pass catcher than spend a ton on a three down player.

Jacksonville - I know we mentioned them in the three down back section but, before coming to the Jaguars, Jay Gruden was a BIG passing down back guy. Until James Robinson, he had never had a starting back who had gotten more than 2 targets per game. He brought in his old pal Chris Thompson but that didn’t really pan out so I could see them bringing in someone that specializes in catching balls. For James Robinson fans, this would be the lesser of two evils.

Tennessee - this team simply doesn’t throw it to the running back. Derrick Henry has never had more than 20 receptions and even Dion Lewis didn’t do much when he was here. It’s an asset they probably should have but I’m not sure how exciting it would be for fantasy football given how dominant Henry is in general.

Tampa Bay - This one is all speculation but we saw Rob Gronkowski and Antonio Brown reunite with their old pal Tom Brady in Tampa Bay. James White thrives in that pass catching role and Ke’Shawn Vaughn never really worked his way out of Bruce Arians’s doghouse after getting COVID so it would not surprise me one bit to see the band get back together.

Other teams who could use a satellite back: Houston, New York Jets, Las Vegas, Buffalo, Atlanta