Andrew Cooper takes a deep dive into the numbers of the Bengals offense and suggests that AJ Green's inconsistencies may not be all his fault. 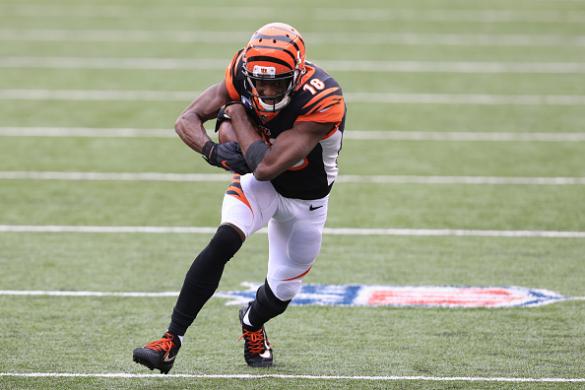 A couple weeks ago we did a write up on DJ Moore and why he had left his fantasy owners disappointed so far.  This week we decided to look at a slightly more challenging and frustrating wide receiver for fantasy gamers - AJ Green.

If you were to only look at social media then you would think it was already figured out.  There are articles out there calling for AJ Green to be benched in favor of Auden Tate .  Fans on Twitter are saying AJ Green has lost a step.  And obviously there is some truth to that as he’s 32 and no longer dominating the way he did in 2011.  But when you take a look under the hood, AJ Green might not be entirely to blame here.

First, let’s look at some stats courtesy of Pro Football Focus.  Green only has 31 catches on 67 targets for an atrocious 46% catch rate.  But, when you look at drops, Green only has 3.  That means that, of those 67 targets, 33 of them were deemed uncatchable - roughly half the balls thrown Green’s way.  Here’s a glaring example of one in a windy game that was pointed out by USA Today’s “For The Win” writer Steven Ruiz.

at what point do we stop pretending this isn't an issue pic.twitter.com/iMFmBwqLEF

Obviously the wind factored in but you also can’t possibly expect Green to catch that. Of the 5 targets Green got last week, 4 of them were deemed uncatchable (and Green dropped the lone catchable one making it uglier than it needed to be).  Here’s another.

The ball was way over AJ Green’s head. Ok. He makes a decision on an uncatchable ball. But AJ was most definitely not trying to tackle Marcus Peters at the end of this return. ???? pic.twitter.com/stqlyOcC6Q

You can criticize Green for not making an effort on the tackle but that’s simply not a catchable ball.  So merely looking at targets and saying he’s not catching them is not a good approach.  Let’s go deeper.

The Bengals run one of the most consolidated snap shares and target shares of any team in the league.  For the vast majority of snaps it’s AJ Green and Tee Higgins on the outside playing split end/flanker with Boyd in the slot.  Because of this consolidation and the fact that the Bengals are second in the league in pass attempts, the Cincinnati is the only team in the league on pace to have three players get 100+ targets - something that’s only happened 2.5% of the time over the last five years.  That’s pretty rarified air considering 7 teams last year didn’t have a single player get 100+ targets.

Of the three wideouts, Green runs the deepest routes with an average depth of target of 14.40 yards.  That’s similar to other deep threats like Kenny Golladay (14.66), DK Metcalf (14.68), and Tyreek Hill (14.82).  Let’s look at Joe Burrow this year focusing on deep throws (which PFF categorizes as “passes over 20 yards”).

Burrow has thrown 43 deep balls which is tied for 7th in the league.  On those, he has completed 8 which is tied for 26th.  Completing 8 of 43 would be 18.6% (when you adjust for a drop that Tee Higgins had, that brings us to 20.9%).  Of QBs who have attempted at least 10 deep balls, an adjusted completion percentage of 20.9% ranks 33rd out of 36 QBs - only Dwayne Haskins, Mitchell Trubisky , and Jimmy Garapollo have been worse.  His passer rating of 51.1% on those throws is 32nd out of 36 QBs with those three and Drew Lock being the only worse QBs.  Not great.  Here are a couple target charts for Joe Burrow courtesy of Next Gen Stats in weeks where he clearly did better with the underneath passes.

Okay, well, what if his struggles on deep passes are AJ Green’s fault? He’s the one running those routes right?  Per PFF, AJ Green has 17 targets on passes over 20 yards and 1 of them has been catchable (which he caught for 22 yards). The rest of the wide receivers have combined for 26 targets beyond 20 yards and 6 of them have been caught.  Tyler Boyd , John Ross , and Auden Tate have caught zero of theirs.  The only receiver having any success on them has been Tee Higgins who has received 6 catchable balls on 16 targets (5 catches and a drop).   For Higgins, 4 of those 5 catches were made down the deep right sideline.  Earlier we said Burrow was ranked QB33 of 36 QBs in adjusted completion percentage.  Even if we take just his most successful deep ball receiver, the only one who has caught multiple passes over 20 yards, you get a 31.25% completion percentage which would only move Burrow up two spots to QB31 - now ahead of Drew Lock and Joe Flacco .  So clearly it’s not just Green.

As you can see, he has a catch rate of 77% in that range catching 100% of catchable balls with zero drops.  Burrow doesn’t have a passer rating lower than ~85 in any of the sectors.  Here’s how Tyler Boyd looks in that range.

As you can see with Boyd, he has no catches on his targets over 20 yards but he’s primarily running his routes underneath.  The passer ratings for Burrow aren’t drastically different but Tyler Boyd simply runs more of those routes underneath that were the bread and butter of Justin Jefferson and Joe Burrow at LSU.

Now, we can’t throw all the blame on Burrow either.  The glaring stat for AJ Green is that, according to NFL’s Next Gen Stats, he is only generating 1.7 yards of separation on average which is the worst of any player with a minimum of 28 targets. DeVante Parker (1.8), Kenny Golladay (1.8), and Mike Gesicki (1.9) are the only other players under 2.  You combine a guy running deep routes who isn’t getting separation with a quarterback that has struggled with accuracy on deep throws, and the result is the nightmare we are seeing.  There are really only three options here.  AJ Green gets more work underneath (which isn’t highly likely since Tyler Boyd has done a great job there and is not speedy enough to be a deep threat).  AJ Green creates more separation.  Or Joe Burrow improves on his deep ball.  There is still hope but we obviously need to see it before we consider Green again for fantasy in 2020.

P. Mahomes - QB
KC1
Patrick Mahomes is in the NFL's concussion protocol.
Mahomes left Sunday's Divisional Round victory in the second half and did not return after suffering the brain injury. "We'll follow that and see how he does the next couple of days," Andy Reid said Monday, a day after he said Mahomes was "doing great" in a generally optimistic statement on his star QB. If Mahomes can't clear the league's protocol this week, Chad Henne would start for KC in the AFC title game against Buffalo. Mahomes' practice participation will be worth watching throughout the week.
Added 1:00 pm (EST)
Added 1:00 pm (EST)

A. Brown - WR
TB1
Antonio Brown is undergoing an MRI on his injured knee.
Brown, who had one catch for 10 yards Sunday, was seen on the sideline in the second half of Tampa's Divisional Round win over the Saints after suffering the injury. His absence opened up playing time for Tyler Johnson and Scotty Miller alongside Chris Godwin and Mike Evans. Brown's practice participation will be key in knowing whether the veteran will be available this week against the Packers.
Added 12:15 pm (EST)
Added 12:15 pm (EST)

A. Jones - RB
GB1
Aaron Jones had 43 percent of the Packers' rushing attempts in the team's Divisional Round win over the Rams.
The theory that Green Bay was saving Jones for massive postseason workloads didn't pan out, as Jones played 47 of 75 offensive snaps for the Packers on Saturday. He salvaged his fantasy day with a 60-yard run at the beginning of the second half. Meanwhile, Jamaal Williams played 28 snaps and AJ Dillon logged nine snaps before exiting with a quad injury. DFS players shouldn't assume Jones' role will change this week against Tampa's stellar rush defense.
Added 10:55 am (EST)
Added 10:55 am (EST)

D. Williams - RB
KC1
Darrel Williams has out-snapped Le'Veon Bell 101-31 in two games with Clyde Edwards-Helaire (ankle, hip) sidelined.
That accounts for the running backs' usage in meaningless contests, not the team's meaningless Week 17 game against the Chargers. Williams out-touched Bell 17-2 in Sunday's win over the Browns, running 30 routes to Bell's seven routes. Williams is clearly the preferred option over Bell and Week 17 standout Darwin Thompson as long as CEH is out. Expect Williams to be a popular DFS option this week against Buffalo is Edwards-Helaire remains out.
Added 10:39 am (EST)
Added 10:39 am (EST)

M. Thomas - WR
NO1
Michael Thomas had an 11.4 percent target share in four games with Drew Brees this season.
Thomas caught none of the four targets he saw in the Saints' Divisional Round loss to the Bucs, smothered by Tampa CB Carlton Davis, who later flamed Thomas on Twitter. Interpersonal conflict might explain why Brees stopped looking Thomas' way this season after Thomas enjoyed a target share of around 30 percent from 2017 to 2019. Whatever the reason, Thomas went from the most reliable receiver in fantasy football to little more than a WR4 with Brees under center. Thomas will be better off with Taysom Hill, who targeted Thomas at a far higher rate this season. That assumes the Saints go with Hill as their 2021 starter.
Added 9:30 am (EST)
Added 9:30 am (EST)

G. Edwards - RB
BAL1
Ravens RB Gus Edwards, LB Chris Board, CB Davontae Harris, and P Johnny Townsend are restricted free agents this offseason.
Baltimore's restricted free agents can negotiate and sign with any team, but the Ravens can offer them qualifying offers that come with the right of first refusal and/or compensation in the form of a draft pick. Edwards, who averaged five yards on his 144 carries in 2020, could draw interest from running back-needy teams impressed by the big back's agility and tough running. In Baltimore, he will surely remain the No. 2 back behind J.K. Dobbins in 2021.
Added 8:10 am (EST)
Added 8:10 am (EST)