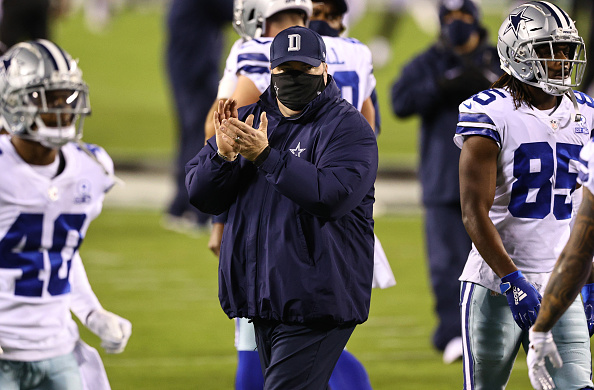 Teams don’t always draft for “need” so sometimes they will just take the best available player regardless of position.  For example - the Cowboys last year taking CeeDee Lamb in the first round despite having Amari Cooper and Michael Gallup under contract.  But we’ll at least attempt to say which positions are least likely to be drafted early (or at all).  The Cowboys locked up Dak Prescott to a long term deal.  They have Ezekiel Elliott , Tony Pollard, and Rico Dowdle all under contract through at least 2023 (Zeke through 2027).  They have Amari Cooper and CeeDee Lamb under contract until 2025.  Michael Gallup becomes a free agent next year but WR is not a glaring need so perhaps they take a later round stab to fill out depth. As I just mentioned, not every team drafts for need but “win-now” teams do.  The Cowboys are win-now and, with Chidobe Awuzie signing a 3 year deal with the Bengals, the Cowboys have a glaring hole opposite Trevon Diggs at CB.  They re-signed Jourdan Lewis but he played 75% of his snaps vs the slot last season.  The other incumbent options are Maurice Canady (who opted out last season) or Reggie Robinson (who is a safety but can play cornerback).  I could see them drafting a CB early who can play right away but, if not, they will be awfully shallow at safety with Robinson converting and may need help there instead.  It’s also worth noting that almost all their safety contracts expire in 2022 or 2023.

Tight end has asterisks on it becuase I don't actually think it's a need.  Because it's not.  They have Blake Jarwin and Dalton Schultz coming back (as well as depth piece Jeremy Sprinkle added) but apparently Jerry Jones has been “infatuated” with Kyle Pitts.  So if he somehow falls to 10, never count out Jerry being Jerry.  This could also help in the future if Michael Gallup doesn't return as Pitts has proven capable of lining up at both split end and slot.  So not really a need for them but you have to mention Pitts in the possibilities of early picks because Jerry Jones has been known to be a bit of a wild card.  If they don't draft Pitts though, I doubt they draft right end at all.

The Cowboys have 10 picks so they could go a number of directions.  Linebacker is either top heavy or inconsistent for them depending how you look at it with Jaylon Smith and Leighton Vander Esch then pretty much no depth after that.  Zack Martin is a force at right guard of course but Travis Frederick is long gone and a center or guard could beef up that once dominant line. They have Demarcus Lawrence , but Aldon Smith, who played the other defensive end spot, is reportedly still visiting other teams such as the Seahawks.  As far as their interior defensive line, they deployed a rotation last year but the highest graded player in that rotation was Antwaun Woods who graded out as defensive interior player #120 per PFF last year.  Their HIGHEST graded player.  They brought in run stuffing tackle Brent Urban from the Bears who was actually the third highest graded tackle vs the run but they may want to add some upside peices to the rotation.  With 10 draft picks, you have to imagine at least one or possible two will be defensive line.  I'm just not sure they spend heavily at a position that Dan Quinn likes to rotate.

Like the Cowboys, the Giants are win-now as well and it’s put up or shut up time for quarterback Daniel Jones.  Saquon Barkley was a first round pick so he has a 5th year option on his deal for 2022 that they will almost certainly exercise on May 3rd.  The Giants already had James Bradberry and then made a huge (and possibly questionable) splash signing Adoree Jackson away from Tennessee in free agency.  They already had 11 CBs under contract before signing Jackson so I can’t possibly see them drafting another cornerback. But who knows.

The Giants run a base 3-4 defense so you essentially have a nose tackle, two defensive ends who can apply pressure but also have run gap assignments, and then outside linebackers who you can send after the QB or drop into coverage.  The Giants have Leonard Williams locked in at one defensive end spot, Dexter Lawrence on the other side, and they signed Danny Shelton at nose (though he’s more of a rotational run stopping piece).  Could see them going with either spot up front but it seems most likely they go after an EDGE guy to play outside linebacker.  With all that said, if offensive linemen Penai Sewell or Rashawn Slater somehow fall, you almost can’t pass on them if you are the Giants either.  So there are a number of things the Giants could do early but I expect at least Sewell to be gone and probably both of them so the Giants trade back or go defense. Some may say that wide receiver is an immediate need for the Giants and it certainly wouldn’t hurt for them to grab one but this offense has a lot of flexibility given the offseason moves.  With the addition of Kyle Rudolph , they could run a base offense similar to the Ravens or Eagles with Rudolph in the Nick Boyle /Dallas Goedert in-line tight end role and Evan Engram in the Mark Andrews /Zach Ertz slot role.  In that configuration you’d only need one of Sterling Shepard or Darius Slay ton to play opposite of Kenny Golladay on any given play.  Engram is a free agent after this year so they may want to plan for the future there but linebacker is where I’d likely address next.  Blake Martinez was an absolute ANIMAL for them but the position is thin beyond him.

There were some questions about Jalen Hurts but trading Carson Wentz then trading back from the 6th pick were symbolic enough moves that they seem to be confident in him at QB.  At RB, the Eagles have Miles Sanders locked up on a rookie deal as well as Boston Scott , Elijah Holyfield, and Jordan Howard for this year so that’s not a need.  Early picks are often meant to play right away so it’s also unlikely to me that they splash on a guard or center to play over Jason Kelce , Brandon Brooks , or Isaac Seumalo despite Kelce and Brooks getting up there in age.

Much like the Cowboys, the Eagles have one corner locked in in Darius Slay and need someone opposite him.  They could be doing the math here on team needs (now likely having an idea who both the 49ers and the Dolphins want at 3 and 6 after all the trade talks) and are willing to take whichever top CB is left at 12 - even if the Cowboys take one at 10.  There have also been some rumors swirling that the Eagles could be switching to a 3-4 defense. Genard Avery ’s move to linebacker would make a bit more sense if that’s the case.  The Eagles brought back Brandon Graham on a 1 year extension and have Derek Barnett on a 5th year option so neither is signed through 2022.  The current linebackers are also criminally understocked with only Shaun Bradley and Davion Taylor signed through 2024 and only Taylor and Eric Wilson making more than a million this year.  Alex Singleton played well and signed his perfomance based restricted free agent tender but that only keeps him for another year as well.  The Eagles have a lot of holes so could go a number of ways at picks 37 and 70. A lot of people will say that wide receiver is an immediate need for the Eagles but the reality is that the Eagles are currently projected to win 6.5 games by Vegas.  This is a transition year where they are burning off the second most dead cap of any team.  I think this is a year where you put the big bodied JJ Arcega-Whiteside at split end, run Jalen Reagor, Travis Fulgham, Greg Ward Jr., and Quez Watkins at flanker and slot and see if you have anything that sticks for the future.  Then next year you make the splash in free agency with the new found cap space or you use a high pick at that point.  Same with tight end - you will eventually need to replace Zach Ertz to have some depth along with Dallas Goedert but it’s not a need and he’s still technically on the team.  If Pitts were somehow there it would be amazing to have him in the Ertz role with Goedert in his in-line role but there are bigger holes to fill.  They need to make long term plays so nothing is off the table with their deeper picks - of which they have many.

The highest paid free agents for the WFT this year were cornerback William Jackson and wide receiver Curtis Samuel - they spent more on them than they did at the quarterback position with Ryan Fitzpatrick .  They just drafted Antonio Gibson who paired well with passing down back J.D. McKissic and they also retained Lamar Miller for the same money James Conner just got from the Cardinals so they are likely all set at running back as well. 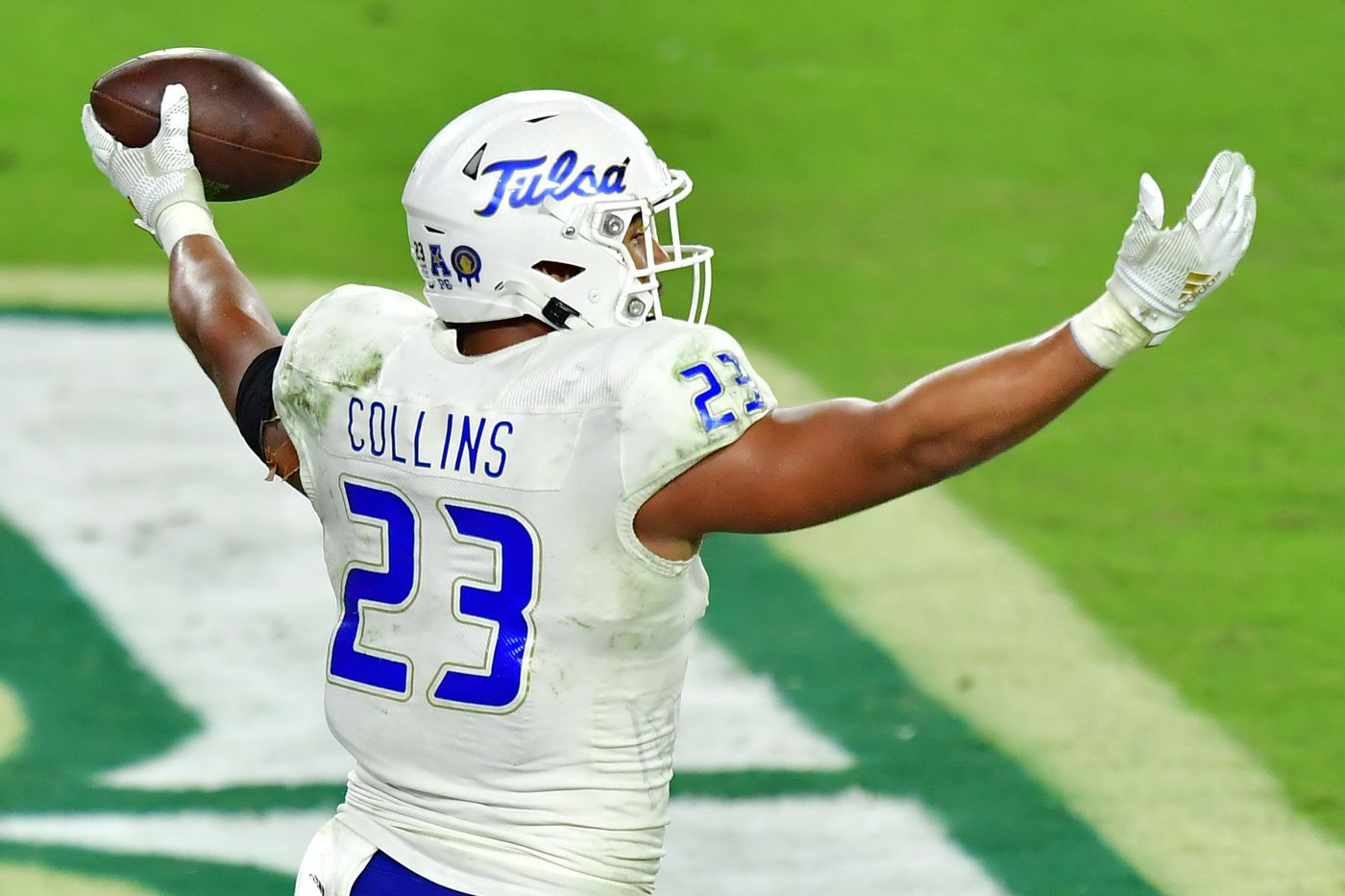 I know some people predict them to take a WR and perhaps in the deeper rounds they may but they now have Terry McLaurin and Curtis Samuel along with tight end Logan Thomas playing a ton of slot so they really only need to have one of last year’s picks in Kelvin Harmon or Antonio Gandy-Golden step up and be serviceable.  They also signed Adam Humphries and both pass catchers named Sims are back so how many wide receivers do people expect this team to carry? Obviously there will be cuts but they currently have 13 under contract.

The Washington Football team is currently in contention based largely on their defense so I fully expect Ryan Fitzpatrick to start and give them a chance.  He’s also a 38 year old hired gun so they should probably make some attempt to plan for the future.  I don’t think they should go crazy trading up and rather should just take whoever may fall at 19 or even 51 in a deep year at the position.  Kellen Mond’s college stats look eerily similar to Dak Prescott ’s as our own Joey Cartolano pointed out in his Quarterback Draft Preview article and he could be available in the second round.  The WFT reportedly looked into the linebacker market in free agency but came up empty so they could also use an early pick there as well.

A team like this could realistically take anyone they wanted.  With a competing team and Fitzpatrick at the helm, they could draft for need now or for the future.  Logan Thomas turns 30 in July and they already released Thaddeus Moss who they picked up next year so a tight end would make sense.  They could also use a safety opposite Landon Collins - fans loved what Kamren Curl provided them last year while Collins was out but I'm not sure either can play cover safety and Landon Collins already poured cold water on the idea of him playing linebacker.  Like most teams, they could also use a little depth on the offensive line so the later round picks for a team like this projected by Vegas to win 8 games could go any direction really.

***If you liked what you read here, be sure to take advantage of our Early Bird Special and get the Fantasy Alarm NFL Pro Package today! Go to fantasyalarm.com/nflpro and use the promo code NFL50 for an immediate 50% off***