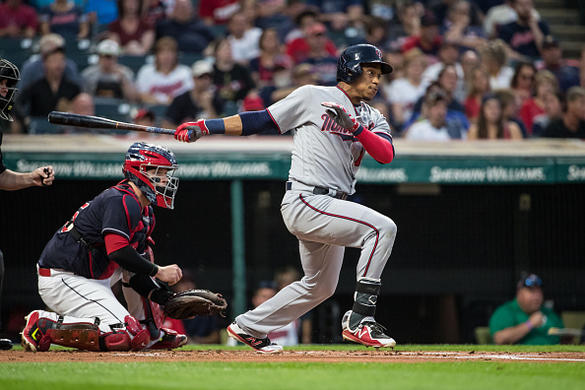 The shortstop position is extremely deep this season. When you get to the middle and the end of drafts and looking to fill the middle infield spot, assuming you don't fill it early on, there are a lot of players to choose from and most will it with a shortstop.

Deciding which shortstop to draft will often come down to what categories are needed at that point. Here are some to consider based on the categories needed.

Jorge Polanco (Twins): Polanco was one of the best values last season and you don't have to pay for it this season. He can often be drafted as a middle infielder. He had a slash line of .295/.356/.485 with 107 runs, 22 home runs, 79 RBIs and four stolen bases. Polanco hit the ball harder and continued to hit a lot of line drives (26.3 percent). Polanco hit .320 in the first half and .267 in the second half, so the average might come down. The power could depend on the changes with the baseball. What we can expect is a lot of runs. Polanco is in one of the best lineups in baseball and will bat second behind Max Kepler and in front of Nelson Cruz , Josh Donaldson , Eddie Rosario and Mitch Garver . Runs are often undervalued by many and Polanco provides a big increase in the middle of drafts.

Paul DeJong (Cardinals): DeJong showed some good things last season and also had flaws that hurt fantasy teams. He had a slash line of .233/.318/.444 with 97 runs, 30 home runs, 78 RBIs and nine stolen bases in 583 at-bats. The average and on-base percentage hurt, but he hit for power, scored a lot of runs and added some stolen bases. He also stayed healthy to compile those numbers. DeJong, who is only 26, was hurt by a .259 BABIP, which is below his career average of .292, but with a 44 percent career fly ball rate high average won't be his strength. The walk rate has improved the last two seasons, going to 9.3 percent last season. The one thing we can count on is power. He had 25 home runs in 108 games in 2017 and 19 in 115 games in 2018. He is slated to hit cleanup for the Cardinals and is a good power source for the middle infield spot.

Corey Seager (Dodgers): Most people consider Seager a disappointment. He was one of the top prospects and many had him No. 1 in 2016. He turns 26 in April and while he hasn't missed a lot of games, there have been a few injuries. He hurt his back at the end of 2017. In 2018, he had Tommy John surgery and hip surgery. He missed time last season with a hamstring injury and has played 157, 145, 26 and 134 games the last four seasons. Seager had a slash line of .272/.335/.483 with 82 runs, 19 home runs, and 87 RBIs in 489 at-bats. I wasn't interested in Seager the last few seasons because his draft price was too high. I am interested this season since he's going outside the Top 15 SS, according to NFBC ADP. Seager hits in the middle of a potent Dodgers lineup and getting 80-100 RBIs at the spot he's going is rare.

Elvis Andrus (Rangers): Andrus comes down to roster composition. With power up in baseball, it's difficult to roster a player that lacks power unless the team is littered with home runs. Andrus hit double-digit home runs for the first time in 2017 with 20. He only played 97 games in 2018 and hit five home runs and with almost everyone hitting home runs last season, Andrus only hit 12 home runs in 147 games. The one consistent part of Andrus' game is stolen bases. Andrus stole 31 bases in 39 attempts last season. In 10 of his 11 seasons, Andrus has played at least 145 games. He has at least 25 stolen bases in nine of his 11 seasons and one of them he only played 97 games. He's only 31 and shouldn't stop running. Andrus is slated to bat second and can also help in runs.

Kevin Newman (Pirates): Newman is slated to hit lead off for the Pirates and is coming off a good season. He batted .308 with 61 runs, 12 home runs, 64 RBIs and 16 stolen bases in 493 at-bats. While he only has a walk rate of 5.3 percent, he rarely strikes out with an 11.7 percent strikeout rate. He makes consistent contact and did so in the minor leagues, too. He can also add 10-15 steals. Average is often a category people fail to look at enough and it happens to me, too. We get enamored with home runs, steals and RBIs and before you know it, the average is low. Newman is a late source of good average.